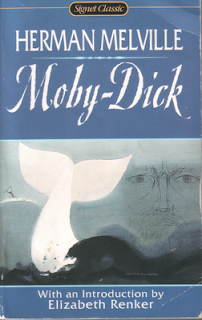 I just finished reading Herman Melville's Moby-Dick for the second time.  Wow!  Reading Moby-Dick is quite an undertaking, for it is rather long (552 pgs.) and is full of digressive chapters that find the narrator, Ishmael, describing the nineteenth-century U.S. whaling industry and philosophizing about the "Honor and Glory of Whaling."  Note that I call these chapters "digressive" largely to acknowledge what detractors of the novel often complain about; I myself really love this book in all its baroque weirdness, and this time through it I found myself getting some great ideas relating to D&D.

First off, there is the overall dark tone of the novel.  The first chapter is entitled "Loomings" and it is an aptly named beginning to this grandiose tale of self-destructive obsession.  We learn early on that Ishmael is a moody sort, prone to morbid thoughts and dark depression, and that for him the antidote to "a damp, drizzly November in my soul" is to go to sea (p. 1).  Of course, against the warnings of a prophetic lunatic on the docks, Ishmael ships with Captain Ahab aboard the Pequod, and the rest is history.  Ahab's monomaniacal quest to wreak vengeance upon Moby-Dick, the infamous White Whale who tore off his leg the previous voyage, eventually leads to the utter destruction of the Pequod and all hands except Ishmael himself.

Like James Raggi's Death Frost Doom or Gygax's Tomb of Horrors, much of the pleasure in Moby-Dick comes from knowing that terrible, tragic things are inevitably going to occur.  Not just the reader, but the characters -- especially the Pequod's pious first mate, Starbuck -- know that Ahab's obsession with the White Whale is destructive and dangerous, and that it will very likely lead to his death.  The closer the crew gets to the southern feeding grounds where the White Whale is known to abide, the more the terrible portents and omens pile up, indicating that the Pequod's voyage is a doomed one.  They all know it, but since Ahab is the captain, and since all hands swore an oath to aid him in his quest for vengeance against Moby-Dick, no one can forestall the apocalyptic destiny that awaits them all in their hubristic confrontation with the whale. 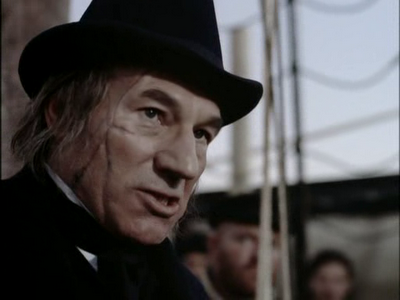 Even more impressive than the content of the novel is the prose.  Melville is a master of the written word, and his poetic and at times sermonistic style in Moby-Dick only adds to the sense of fatalistic doom that hovers over the entire novel.  Ahab's speeches and internal monologues alone are well worth the price of admission; these passages will be familiar to fans of Star Trek II: The Wrath of Khan, as most of Khan's best lines in that movie are horked from Captain Ahab:

"Aye, Starbuck; aye, my hearties all round; it was Moby Dick that dismasted me; Moby Dick that brought me to this dead stump I stand on now.  Aye, aye," he shouted with a terrific, loud, animal sob, like that of a heart-stricken moose; "Aye, aye! it was that accursed white whale that razed me; made a poor pegging lubber of me for ever and a day!"  Then tossing both arms, with measureless imprecations he shouted out: "Aye, aye! and I'll chase him round Good Hope, and round the Horn, and round the Norway Maelstrom, and round perdition's flames before I give him up.  And this is what ye have shipped for, men! to chase that white whale on both sides of land, and over all sides of earth, till he spouts black blood and rolls fin out." (p. 156)

"He tasks me; he heaps me; I see in him outrageous strength, with an inscrutable malice sinewing it.  That inscrutable thing is chiefly what I hate; and be the white whale agent, or be the white whale principal, I will wreak that hate upon him.  Talk not to me of blasphemy, man; I'd strike the sun if it insulted me."  (p. 157)

or, lastly, Ahab's final utterance, moments before his death:

"Oh, lonely death on lonely life!  Oh, now I feel my topmost greatness lies in my topmost grief.  Ho, ho! from all your furthest bounds, pour ye now in, ye bold billows of my whole foregone life, and top this one piled comber of my death!  Towards thee I roll, thou all-destroying but unconquering whale; to the last I grapple with thee; from hell's heart I stab at thee; for hate's sake I spit my last breath at thee.  Sink all coffins and hearses to one common pool! and since neither can be mine, let me then tow to pieces, while still chasing thee, though tied to thee, thou damned whale!" (p. 550)

So how does this relate to D&D?  In a couple of ways:

1.  Ahab is an awesome model for a vengeance-seeking adventure party organizer.  Just as Ahab binds the Pequod's crew to his doomed enterprise via the promise of gold (he offers a gold doubloon to the first crewman to spot Moby-Dick) and via his absolute authority as ship's captain, so too could a nobleman or rich high-level adventurer hire a PC party to assist him or her on a doomed mission of vengeance.  The key would be to have the vengeance-seeker come across as relatively sane at first, then, once the group is well into the dungeon, the employer's obsession grows, endangering the party and its mission.  Ahab does just this: as the Pequod nears Moby-Dick's hunting grounds, the captain grows ever more hellbent and agitated, and begins making dumb mistakes like smashing his sextant etc. 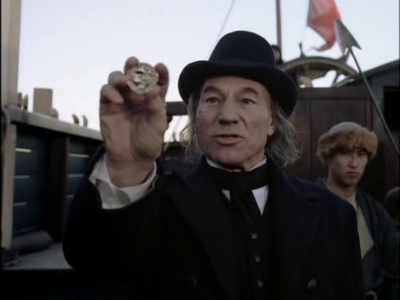 Ahab offers a gold doubloon to the crew member who first sees Moby-Dick.
2.  Whaling. Why isn't whaling more often mentioned in D&D?  There are often ships, pirates, and seagoing adventures, but why not whaling?  As the wikipedia entry on the history of whaling states, humans have engaged in whaling since prehistoric times, and harpoon-and-line whaling may have been taking place as early as 6000 B.C.! To be fair, these early whaling practices took place from shore; whaling ships proper did not enter the picture until the early 1600s A.D.

In any case, never one to let historical fact stand in the way of a good time, it occurs to me that whaling surely could be a staple industry in seafaring Arandish kingdoms like Noffel, Blint, and Suhl.  As I was reading Moby-Dick this time around, I decided that this will indeed be so in Ara.  I further decided that Blint will be to Arandish whaling what Nantucket is to U.S. whaling in Melville's novel: its veritable capitol.  So Blint's largest seaport city, Blintsport, is hereby a center of the whaling industry in the Bay of Noffel. 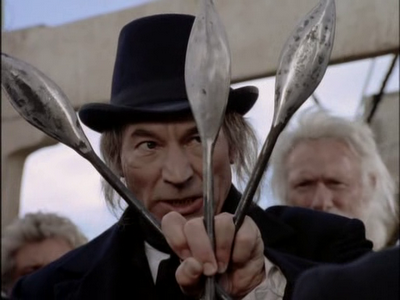 Ahab's lust for vengeance destroys himself, his ship, and his crew.

Oh, grassy glades! oh, ever vernal endless landscapes in the soul; in ye, -- though long parched by the dead drought of the earthly life, -- in ye, men yet may roll, like young horses in new morning clover; and for some few fleeting moments, feel the cool dew of the life immortal on them.  Would to God these blessed calms would last.  But the mingled, mingling threads of life are woven by warp and woof; calms crossed by storms, a storm for every calm.  There is no steady unretracing progress in this life; we do not advance through fixed gradations, and at the last one pause: -- through infancy's unconscious spell, boyhood's thoughtless faith, adolescence's doubt (the common doom), then scepticism, then disbelief, resting at last in manhood's pondering repose of If.  But once gone through, we trace the round again; and are infants, boys, and men, and Ifs eternally.  Where lies the final harbor, whence we unmoor no more?  In what rapt ether sails the world, of which the weariest will never weary?  Where is the foundling's father hidden?  Our souls are like those orphans whose unwedded mothers die in bearing them: the secret of our paternity lies in their grave, and we must there to learn it.  (p. 473)