Wizards of the Demon Sword

Thanks to Netflix Instant streaming video, earlier this week I revisited an old B-movie favorite, Troma's Wizards of the Demon Sword (1991) starring Lyle Waggoner as the evil wizard Khoura!

Lyle Waggoner (of "Wonder Woman" fame) plays the main wizard in Wizards of the Demon Sword.
Wizards of the Demon Sword is a craptacular mishmash of a fantasy movie -- "mishmash" mainly in the sense that the film cannot seem to decide whether or not it wants to take itself seriously.  Is its writing and dialogue unintentionally clunky?  Or intentionally parodic?  I always assumed the former, which actually increases the pleasure for me.  (Read this accurate review to see what I mean in more detail.)

But in addition to Wizards' abundant "so bad they're good" qualities (e.g., the AWESOME and very funny "Seer of Roebuck," depicted at the end of this post), there really are a couple of key ideas in the film that make it compelling:

(1) An evil artifact -- actually a dagger, NOT a sword as the film's title implies -- that is the key to awakening a slumbering, all-powerful demon.  The dagger, called the Blade of Aktar, is entrusted to a good wizard, Ulric, who pledges the life of his firstborn daughter to guarantee the blade will never be used to awaken the demon.  You see, awakening said demon requires one to first kill Ulric's daughter Melina with the Blade of Aktar.  I thought that concept, of a magical artifact that requires the sacrifice of one specific person in order to function, was compelling in a Carcosa-esque kind of way.

(2) A swaggering, narcissistic warrior character who ultimately saves the day.  I admit, ever since Willow's Madmartigan (or, in a more serious and tragic vein, Tolkien's Boromir) I have been a sucker for the swordsman with a too-high opinion of himself, the fighting man who believes in his own legend / capabilities / importance much more emphatically than does anyone else around him.  Enter Wizards of the Demon Sword's Thane, a swaggering idiot with a bastard sword and tons of charm.  The best part of the movie is when Thane gets outwitted by an evil henchman played by Michael Berryman, is tied up to stakes in the ground, and is subsequently discovered by an equally egotistical warrior named Damon.  Damon agrees to release Thane if he will fight him; Thane agrees, and after sharing wine from Thane's wineskin, the two swordsmen fight and wrestle each other while exchanging lots of taunting one-liners.  Of course, after awhile, they stop the fight because they realize they really like each other; Damon reveals that he has heard of Thane before and always wanted to test his own skills against those of the legendary Thane. 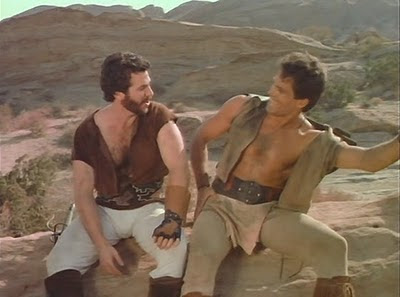 After protracted duelling and taunting, Damon and Thane become buddies.
In my current RPG-focused mindframe, I couldn't help but wonder: how would this apply to a D&D campaign?  My own PCs are beginning to develop reputations in Southern Minoch, and so we enter a phase of the campaign where NPCs may come looking for them -- some to pay respect or bestow admiration, others to challenge the party's presumed greatness.  And what of this notion that some NPC originally coming to pick a fight might end up as a buddy, a henchman, or a loyal follower?  This sure puts a different spin on the typical narrative I see in my campaigns, wherein a new NPC or PC is hired out of a merc bar or is rescued from a dungeon.  Or worse, simply appears out of nowhere as in the first 30 seconds of this video (from The Gamers):


Does anybody else use interesting or unique ways to introduce new PCs or NPCs to the party?

While you think about that, also consider checking out Wizards of the Demon Sword -- it ain't no Dragonslayer (which gets my vote for best Fantasy Film of All Time), but it sure is a hoot, and who knows, it may spark all kinds of great RPG'ing ideas for you, too! 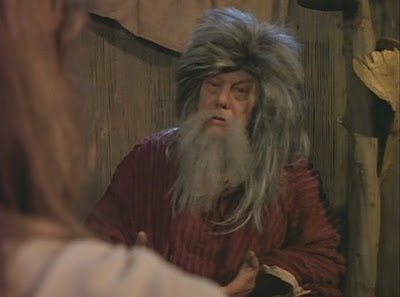 The Seer of Roebuck says: "Watch Wizards of the Demon Sword, and beware my ridiculous wig!"