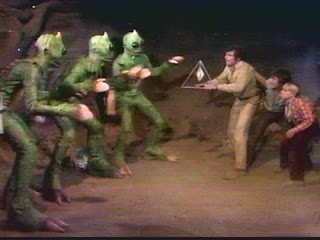 Marshall, Will, and Holly face off against a group of vicious Sleestak.
I am of the generation who grew up watching the various television productions of Sid and Marty Krofft: Far Out Space Nuts, The Bugaloos, The Lost Saucer, H.R. Pufnstuf, Sigmund and the Sea Monsters, and, of course, my all-time favorite, the classic Land of the Lost.  Like many kids then and now, I LOVED dinosaurs, so of course that was a major part of the draw of LotL.  But personally I was always far more scared of and fascinated by the sleestak, those underground-dwelling, bug-eyed, lizard-looking humanoids that couldn't move very fast but had that eerie hiss than haunted my youthful nightmares.

So of course, as a grown-up (?) Labyrinth Lord, I could not resist statting up my beloved sleestak for potential dungeoneering use.  [A pdf version of the Sleestak description and stats is available here.] 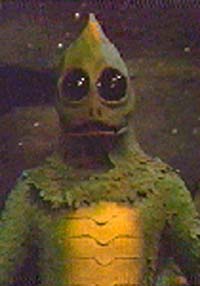 Sleestak are pale green humanoids with huge eyes that dwell exclusively underground.  Sleestak suffer extreme penalties (-3) to attack in full sunlight, and they are notoriously afraid of fire. Even a lantern or weakly burning torch is enough to drive them back; they attack groups of dungeon delvers by overwhelming them in numbers, using their unique group-based Mesmerizing Hiss (see Special Abilities below) to disable opponents, then knocking aside and extinguishing torches and other light sources. Sleestak use primitive spears, clubs, and daggers, but do not wear armor or use shields.

Sleestak see incredibly well in the dark -- they have Infravision to 90' and even have limited vision capabilities in magically generated darkness (see Special Abilities below). Sleestak are literally never encountered singly -- they always travel and hunt in groups of two or more. If a sleestak is encountered alone or is separated from its group by trickery or combat attrition, it will always flee.

Mesmerizing group hiss: When approaching enemies or entering combat, Sleestak continuously hiss. This hissing does not count as a separate attack action; Sleestak can hiss at will, and always do so when attacking or when threatened. Two or more sleestak hissing together will Stun all hearers within 100' for 3 rounds -- an initial saving throw vs. Spells is permitted to avoid this effect. Creatures Stunned by sleestak group hissing cannot attack or take other actions, and are themselves attacked at +4, with no DEX- or shield-based AC bonuses (see AEC p. 143). The undead and other creatures immune to charm effects are immune to the effects of the Sleestak group hiss. One sleestak hissing alone has no effect; in fact, sleestak rarely hiss when alone. 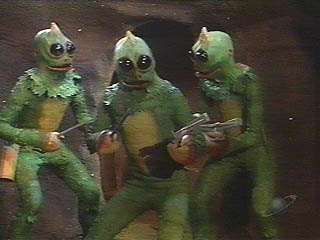 "Now which way did those pesky humans go?"