Ara is the name for the imaginary game-world in which my role-playing gaming adventures have taken place since the early 1990s.  The name refers to both the continental land mass of Ara, and, at times, the whole world or dimension in which that continent exists.

Here is the most recent and accurate map of the Lands of Ara: 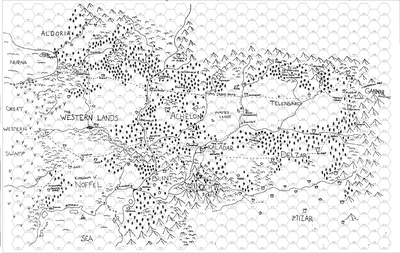 The Lands of Ara.  Scale: 1 hex = 36 miles.
Cartography by Carter Soles and Dave Miller, hexography by Spawn of Endra.
Like many role-playing gaming bloggers, I am both a Dungeon Master -- the person who guides players through the game-world and arbitrates the game rules -- and a world-builder, i.e., someone who spends way more time than he reasonably should thinking up new ideas for the imaginary realm of the Lands of Ara. We old-school RPG'ing bloggers like to spend a lot of time sharing the specifics of our individual game-worlds (often called "campaign settings" or "sandboxes") and proffering advice about how to create them. If you are interested in how this process occurs, I would direct you toward two key resources that accurately explain the game-world-creation process for old-school D&D:

(1) Rob Conley's How to Make a Fantasy Sandbox series, and

If you are interested in more details about the Lands of Ara setting, see the Lands of Ara Gazetteer under the "Arandish Campaign Resources" tab above, or browse through the archived posts to the right.