U for Undead Stirge

Special Thanks to Peter Regan, editor of Oubliette Magazine, for his Zombie Monster rules in Oubliette Issue #4,  which were instrumental to the creation of this monster.

An undead stirge cannot fly, but instead hops from place to place like a grotesque cricket. It does NOT get the +2 to hit granted to living stirges. Undead stirges have all the usual undead immunities.

A successful attack by an undead stirge deals 1d3 damage, and the stirge is then considered attached to its opponent, draining blood for 1d3 damage per round until the victim dies or the undead stirge is destroyed. 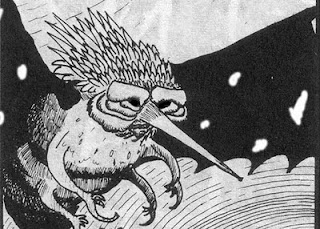 "I'm coming to kill you, Barbara!"