The Free City of Kaladar is the most important single urban locale in all of the Lands of Ara. It is by far the largest Arandish city, with a population of over 50,000 -- only the northern dwarven mega-city of Gannar (pop. 38,000) even comes close to Kaladar in terms of geographical size and number of denizens.  The Free City of Kaladar is the central hub of most commerce in Ara, being conveniently located upriver from the Bay of Noffel and fairly accessible to the prosperous kingdoms of Noffel, Achelon, Delzar, and Blint.

Interestingly, however, no complete map of Kaladar has ever been created, despite the fact that my gaming groups have been adventuring there for almost two (real-time) decades now. The closest thing I have to a complete map of the place are a few general sketches of this stripe: 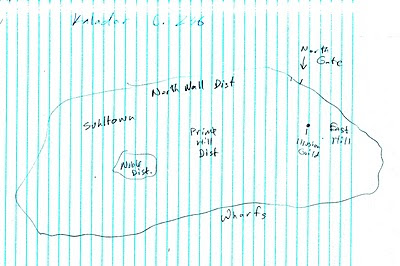 This sketch, one of the few extant maps I have of Kaladar, may not even be accurate anymore in light of some of the Kaladarian district descriptions given on this blog.
In my prior post on the Free City, I noted that:

(1) Kaladar began its existence as an Achelonian Fort called Hragdor, and was ruled by the Achelonian Queen until Old Calendar year 3020, eighteen years into the Old War between Achelon and Telengard. In that year, under the leadership of a powerful summoner named Kaladar, Fort Hragdor declared itself a Free City and elected its first Lord Mayor.

(2) The Free City is known throughout Ara as the place where practically anything can be bought, traded, hired, sold, or stolen -- kind of like the "Bazaar at Diva" from Robert L. Asprin's Myth Adventures books.

(3) Along this line, all accepted forms of human magic, and many forbidden forms, have at least a small guild or hideout within Kaladar's walls.  The Free City also houses the secret headquarters of the Red Hand, Ara's most feared and notorious assassins' guild.

Those wanting more detailed descriptions of the Free City's various districts should consult my original post on the locale. However, to facilitate use of the downloadable Encounter Tables I provide below, I will briefly list the major Kaladarian districts by their level of socio-economic affluence:

Despite the Free City's centrality and importance in Ara, my current PC group has not spent much time in Kaladar, having just passed through the city early in the campaign on their way from the Western Lands to Minoch. Therefore I have not had much practical need to generate any encounter tables for the place. However, in deference to Zak's Decree about how a setting should be "described," I hereby include three different downloadable Free City of Kaladar d30 Encounter Tables for your pleasure:


Free City of Kaladar - Affluent District
* This Sage may be a member of Sawith the Scribe's staff, or else one of his competitors.
** For this result I use Michael Curtis' "Random Town Events Table" available here or as pdf here.

Free City of Kaladar - Common District
* For this result I use Michael Curtis' "Random Town Events Table" available here or as pdf here.

Free City of Kaladar - Seedy District
* For this result I use Michael Curtis' "Random Town Events Table" available here or as pdf here.