No, I am not referring to the Marvel Comics title of the same name, but rather the more general definition of the term "X-Factor," to wit:

"a hard-to-describe influence or quality; an important element with unknown consequences"

To me, this concept describes something fundamental both to my own approach to RPGs and to the old-school gaming style in general. Sure, most RPGs (old-school or no) use dice or some other form of randomizing element, but what I am talking about here is a real COMMITMENT to playing the dice as they lay, and also incorporating the ideas, suggestions, and surmises of the PCs into the fabric of the ongoing campaign in significant, consequence-changing ways. 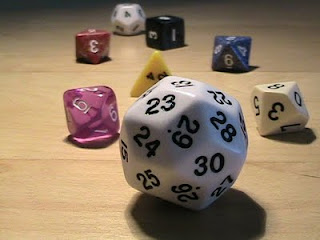 Play the Dice as they Lay. This is an x-factor by which many old-school DM's swear. There seems to be something about randomness for old-school gamers, so much so that many of us advocate strongly for allowing the dice, not DM fiat, to have "final say" in a great many game situations. Of course the DM is still "god" or the final rules arbiter, but I think many of us in the OSR favor adapting ourselves to the result of the dice rather than "fudging" or overruling the dice.

A personal example of this would be my own recent efforts to stock the DMG Dungeon map. Prior to engaging in that project just over a month ago, I had literally never before randomly stocked a dungeon! I grew up in the age of pre-packaged adventure modules and usually played those; even when I created my own adventures and dungeons, I usually deliberately chose which monsters to place where. Of course I used the wandering monster tables, but only for actual wandering monsters; I never initially stocked a dungeon using them!

But as that random stocking project has unfolded, I have quickly realized how FUN random stocking is! Holding oneself to the outcome of a series of die rolls, then creating a justification / back story for the monsters, traps, and treasures one randomly gets, is hugely satisfying. It tests the very ability I prize most in a referee: the ability to respond creatively to x-factors on the fly. This is a skill I work to keep sharp for myself, and random dungeon stocking has been a terrific way to keep myself inventive and flexible around an unforeseen set of x-factors. In fact, I am so sold on the virtues of random dungeon stocking that I plan to utilize the technique for the adventure I am writing for play at OSRCon this year, The Tower of Death.

The d30 House Rule. Another place where I have surely introduced a big x-factor into my ongoing campaign is by having decreed a "nightly d30 roll" house rule, i.e.:

"Once per session each player may opt to roll the referee’s d30 in lieu of whatever die or dice the situation normally calls for. The choice to roll the d30 must be made before any actual rolling has occurred. The d30 cannot be rolled for generating character statistics or hit points."

This house rule, which I believe originates with Jeff Rients but that I picked up from Carl's Mutant Future game, introduces a fairly powerful x-factor into the game, especially in the hands of inventive players. As my own experiences with Uncle Junkal's charm person ability and the party's remarkable Hobgoblin Camp Raid make clear, allowing a nightly d30 roll by each player (and me as GM) can seriously disrupt "game balance," if one were into preserving such a thing. I am not. I play these games to have fun and to engage everybody's imagination as much as possible. To me, the inexplicable, out-of-the ordinary, and downright miraculous all have a place at my game table -- I want to be awed, surprised, and caught off-guard. So do the players. So we all equally submit to the randomness of the dice, and all have our chance to "beat fate" with a lucky d30 roll once per session.

Players as x-factors. I think that clever, imaginative players are the best possible x-factors, the most invigorating elements that keep me on my mental toes as a DM. Indeed, when I hear the phrase "an important element with unknown consequences," the first thing I think of is my group of players. I can never anticipate how they might respond to narrative hooks, NPCs, or campaign developments, and I like that very much. Refereeing PCs is like the old saying about herding kittens -- I could try to "control" them, but they would always slip away from my corralling, would always behave according to their own desires rather than mine. No, I can keep certain balls in play, and hope that the PCs will run with some of them, but they are always free to (and frequently do) act according to their own whims and take off in directions completely unforeseen by me. Like the dice, my players become an x-factor I must creatively and flexibly respond to, quite often on the fly. And this is where some of the most satisfying moments in the game happen for me. I LOVE what my players throw into the mix, and I look forward to new surprises from them every session.  I can't reveal specifics of course, because the campaign is still mid-stream, but some of the coolest narrative developments in the Arandish Campaign so far have emerged from the ideas, surmises, suggestions and actions of the players.  And "huzzah" for that -- it is exactly as it should be!