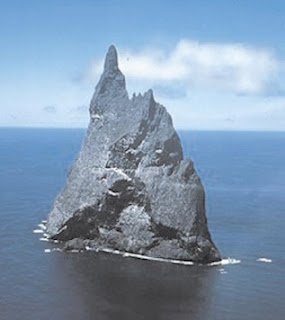 Ball's Pyramid, an erosional remnant of a shield volcano and caldera that formed about 7 million years ago in the Pacific. Also the model for the Wraithstone Wall off the NE shore of Wraithstone Island.
Several weeks ago, Paul Gorman of Quickly, Quietly, Carefully officially proposed a collaborative OSR quasi-adventure path project (originated by Telecanter) called the "Sea of O'SR."  This would be a treasure-hunt-style adventure centering upon a series of small islands -- Paul's specific suggestion was that each contributor write up a 3-hour islet.  Here, at long last, is mine.

[Note: I am particularly indebted to Spawn of Endra, who added the numbered hexes to my hand-drawn map, and to ckutalik at Hill Cantons, whose How to "Awesome Up" Fantasy Maps post inspired me to add the jungle tree icons to the previously released, functional-but-bland "teaser version" of the Wraithstone Island map.] 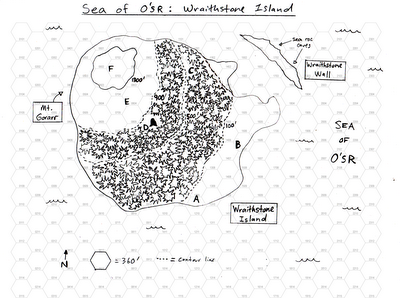 Wraithstone Island
Wraithstone Island consists of two small proximate land masses: the main island to the west, which consists of the upper fourth of Mount Gorarr, a still-active oceanic volcano; and the Wraithstone Wall, an erosional remnant of a shield volcano caldera from a far older (and now extinct) volcano. The Wraithstone Wall lies just off the northeast shore of the main island, and is likely the feature most responsible for giving this spooky locale its fear-inducing name (see below). Both portions of the Island are tropical and humid, with persistent mists clinging to the lower areas at and just above sea level. The Wraithstone Wall is barren volcanic rock and has no denizens except the sea-rocs who nest in its upper caves. The larger Island to the west has two small black-sand beaches, and is otherwise heavily jungled. Only the ominously smoldering top of Mount Gorarr pierces the dense jungle canopy.

The Wraithstone Wall
A barren, jagged tooth of black volcanic rock sticking out of the Sea of O'SR, the Wraithstone Wall is so named for the many vertical lava trails and two gaping caverns that pock the wall's northeastern surface, creating the appearance of a ghost-like figure with two hollow eyes rising out of the tropical mists. Furthermore, near-constant winds in the area whistle through the Wall's caverns in such a way as to cause a constant, high-pitched, and terrifying howling noise that can be heard anywhere within a half-mile. It is this piercing, unearthly noise that drives most denizens of the neighboring Wraithstone Island somewhat mad over time; for new visitors to the region, the Wall's howling noises cause fear (as per the 4th Level MU spell, AEC p. 62) unless the hearer saves vs. petrify / paralyze. This save is required once per day spent within earshot of the Wraithstone Wall, and the sounds may also have some subtle cumulative effects upon hearers, at the DM's discretion.
Nesting inside the Wraithstone Wall's two large upper caves -- called "The Wraith's Eyes" by regional sailors -- are a pair of huge sea-rocs (see "Large Roc" LL p. 93). The two rocs will attack any ship or boat that approaches the Wall or the black sand beaches north of Area B. They will not attack any of the Sprite People. The rocs are impervious to the effects of the Wall's incessant howling noises.
There are no wandering monster encounters in or around the Wraithstone Wall. Most sea creatures and seagoing monsters avoid the place, due to the noise and the rocs.

Wraithstone Island and Mount Gorarr
Wraithstone Island proper consists of black sand beaches to the east, below the 100' contour line; dense jungle from the 100' to 900' contour lines; and black, volcanic rock above the 900' line, leading to the smoking caldera of Mount Gorarr at an altitude of 1300'. The island's shoreline consists of the two sand beaches and sheer cliff faces; nothing else. Thus the eastern beaches are the only two safe landing points for boats; however, note that the sand beach north of Area B lies within the two sea-rocs' territory (see The Wraithstone Wall above). There are no wandering monster encounters on the black sand beaches. In the jungle, there is a 2 in 6 chance every hour of a wandering monster. On the caldera's edge (above the 900' contour line) there is a 1 in 6 chance of a wandering monster every hour.

Wraithstone Island Key
A. Village of St. Corky: Home of the shipwrecked crew of the Valiant, a merchant vessel commanded by Captain Roger Dorian. The captain and 3rd Mate Shawn Grog-Blossom are both possessed by Lesser Wraiths (see Area C below) and will do everything possible to entice the adventurers to climb Mount Gorarr and enter the Necromancer's Cave (Area E). They will insinuate that the treasure (or whatever the PCs seek) lies in that cave, but they will say nothing about the existence of Sark. Other wrecked shipmates suspect something strange is going on with their captain but volunteer nothing, fearing reprisals.

B. Village of the Sprite People: This beach village is inhabited by the Tribe of the Sprite, humanoids (statted as Neanderthals or 0-Level Humans) who worship tropical dryads (see "Dryad" LL p. 72) living in the jungle immediately northwest of here. Sprite people consider it a divine calling and a deep honor to be asked to join a "jungle spirit" (Dryad) in her tree. They may attempt to persuade PCs to feel the same way. Note: whatever major treasure (hunt) item brought the PCs here in the first place is currently stored in one of the Tropical Dryad's trees. The Sprite People know nothing about this specific item, but they wax rhapsodic over legends of "divine treasures" guarded by the "jungle spirits."

C. Village of the Wraith People: Dwelling place of the Tribe of the Wraith, humanoids (statted as Neanderthals or 0-Level Humans) who worship Sark's Lesser Wraiths (AL C, MV 120' (Fly 240'), AC 3, HD 3, #AT 1 (touch), DG 1d6 and energy drain, SV F3, ML 12, have the same characteristics as typical Wraiths except that they take full damage from magical and silver weapons, and only drain a life level on an attack roll of natural 20) and who conduct seasonal sacrifices to their "spirits" at the Wraithstone Wall. The Wraith People will attempt to convince PCs to stick around their village until nightfall when the "true spirits" (wraiths) will come visit.

F. Caldera of Mount Gorarr: The topmost region of Mount Gorarr represents a steep, treacherous climb over loose lava rock, with no established trail. There is a 2 in 6 chance of PCs slipping (1 in 6 for mountaineering types including dwarves, rangers, etc.) and taking 2d6 falling damage. Anyone descending into the smoldering caldera will be attacked by the fire elemental (HD 16, see "Elemental" LL p. 73) and its two magma elemental minions (AL N, MV 60', AC 3, HD 12, #AT 1, DG 4d6, SV F12, ML 12, cause heat metal effect in 20' radius, adapted from "Para-Elemental" MM2 p. 95), who all fight to the death. Mount Gorarr has mini-eruptions every 1d4 weeks; these eruptions spit hot magma into the caldera but rarely (1 in 6 chance per eruption) ooze over the top. Even lava that comes over the edge usually solidifies before reaching the 900' contour line and the jungle.