[From the midst of a haze, The Spawn submits for your consideration:]

Egads. Carter has been back in town for just over a week, which means that 1) we had a gaming session where he was in the same room as most of us instead of Skyping, and 2) his band Telepathic Dumpster reformed for a house concert Friday night and fun and madness prevailed! 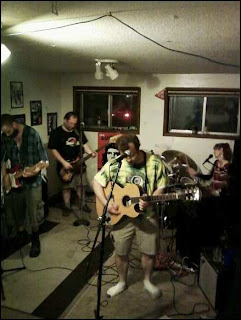 Telepathic Dumpster! L-R: Josh Marks (Master of Rock),
Carter Soles, Carl Nash, Emily Afanador
At the end of the night, with a few (too many) adult beverages under my belt and pretty stoked from the music and friends, I found that I was in no condition to pilot a bike home. And Eugene is the kind of place where you can get a DUI on a bike, so it doesn't pay to be swerving all over the place even if you can more or less keep it together. So I walked all the way across town on an hours-long trek with a few wrong turns (Great, I'm at 24th and Charnelton, not too far now ... oh, wait, that's 24th and Chambers. Fuck.), a couple of disorientations (the avenue numbers get bigger going SOUTH, not north), and of course a light but steady rain. Luckily I made all my random encounter rolls and nothing untoward happened, and arrived home with the day dawning. (It's apparently less than 3 miles, but it seemed to take forever.)

I awoke much later with the classic Blind Faith tune Can't Find My Way Home in my head, of course. (Don't ask me why this clip has applause tacked on at the beginning and end, skip up to 0:15. And ignore some most of the pictures.)

The distinctive junk splash cymbal (at 0:41 for those unfortunate souls who don't know what I'm talking about) is the inspiration for:

Gunger Beykr's Chime of Infallible Wayfaring
The chime was created by the mad wizard Gunger Beykr during his aeons-long campaign to destroy his eternal enemy, the foul and corrupt Lich Litchell. At one point, the lich managed to cast a spell that disoriented Beykr so badly that he wandered the countryside for 6 years trying to find his way back to his castle, while never being more than 2 miles from it. On numerous occasions he walked right up to his castle, but didn't recognize it, and stumbled back out into the woods to wander more. Eventually his familiar, a sarcastic tabby that had been watching his master's vagrancy with some mirth, got bored with it and managed to bring him back to the castle and dispelled the curse. Beykr created the Chime of Infallible Wayfaring shortly afterward.

The chime looks like a fairly crappy 6" brass cymbal with several cracks in it. When struck it produces a flat rapidly decaying crash, and shows a lost PC the route back to a specific place known to the PC that is considered non-threatening. This might not be a "safe" place per se, like the area outside of a dungeon entrance that is guarded by hidden goblin snipers, but it's out of the mess they are in. PCs under spells that cause confusion, blindness, hallucinations, insanity, aimless quests, etc. can use the chime to get them back home or elsewhere, though the effects of spells generally remain in force. The PC must be able to recognize the need to use the chime -- if they don't know they are lost or impaired, they wouldn't use it. The chime may be used only once per month.