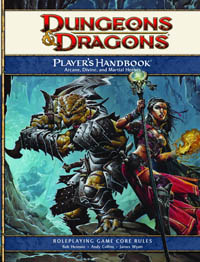 This past Saturday I visited my local public library in order to sit in on an ongoing D&D IV game. Of course, I am not super-thrilled with the established group's rule system of choice, but I am trying to build up my network as a public rpg'er so I felt it was important to make an initial connection with this particular gang. I am very glad I did.

The facilitator / DM, a really cool dude named Brandon, warned me ahead of time that he and I would be the two oldest people there -- I think Brandon may be in his 20's and I turn 40 this August. Indeed, the weekly event is listed on the library's website as "Dungeons & Dragons (Grades 6-12)," so its intended demographic primarily encompasses adolescents and teenagers.

"Be a part of this amazing story-creating game. Join the group, build your character and set out on a fantastic quest or adventure. Play D&D with other teens instead of on your computer!"

To be super-clear, my participation with Brandon's younger RPG'ing group is intended as a SEPARATE enterprise from the monthly public Labyrinth Lord game for which I am currently laying groundwork at my local bookshop. I will keep you updated on my progress with THAT project in separate future posts.

No, this group has already been playing together for a couple of years. In fact, I am in some ways being brought in as a ringer: Brandon wants me to take over the DM'ing reins at some point so that he can spend some time in the group as a player.

The group itself was a real kick in the pants. Funny and smart young people ranging from maybe 13 years old to 16 years old (that's a guess, though one guy actually told me he was 13). They know the 4e rules quite well, so I will (as usual) lag behind them a bit in rules mastery. But they won't care -- they are there to role-play and have fun.

Brandon is a very good DM -- he has invented a unique campaign scenario (involving all the reptilian and insectoid races uniting against all the mammalian ones) in which the players seem quite invested. They relished bringing me up to date about their campaign, telling me whose character hated whom, and which of the NPC villains were the party's worst enemies. It was great fun.

I did not even technically enter play at last Saturday's session. It took me an hour to generate a character -- a human cleric named Brother Zod -- and the current PCs never finished the encounter penultimate to their running into me and another new player. So I will join in "officially" next week. But I still had a blast watching these younger players get immersed in the game.

As for my future plans with the library group, I will play along in the 4e campaign for awhile, until we get to know each other, then when Brandon is ready for me to DM, we will actually switch rules systems. There is no way -- and I warned Brandon of this going in -- that I would be willing to run anything but an "old-school" rules system like Labyrinth Lord or Mutant Future. (Like ChicagoWiz says, I am allowed to say "no" and set limits on what I'll do.)

In fact, now that I have met the players, I am particularly tempted to expose this group to Mutant Future. I think MF's gonzo style and randomness will keep the library group's interest piqued. Plus it is the same basic mechanic as LL so if they want to swap over to straight fantasy, it will be a gentle transition to my preferred rule system.

We will see -- baby steps. But I am excited to have found a group of younger gamers to potentially introduce to the Old Ways.