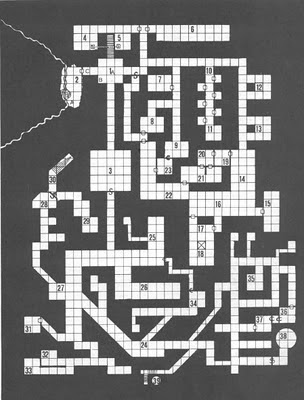 And now, the final installment of my "stock the sample dungeon level from the Dungeon Masters Guide p. 95" project. To catch the story so far, see James C.'s original announcement of the project, his updated list of participants, and my stocking installments Part 1, Part 2, Part 3, Part 4, Part 5, Part 6, Part 7, and Part 8.

(2) I am using the Labyrinth Lord basic dungeon stocking tables on LL p. 124 to stock the map, with a few customized twists, i.e., I am deliberately placing a few monsters and treasures as I see fit.  I am also using Michael Curtis' Dungeon Alphabet and some of the random tables in the back of the Advanced Edition Companion to randomly generate "unique" encounters and miscellaneous and/or atmospheric room features.

Now to stock rooms 35 through 39, thereby completing the level:

Room 35:  Rolled and got trap with treasure.  So I rolled on the "Random Traps" table on p. 32 of the Advanced Edition Companion and got "spiked pit that locks shut." Treasure = 1400 sp.

Room 36: Got monster, no treasure. I rolled "Throghrin" on the Level 3 Wandering Monsters table.

Room 38: Rolled empty, no treasure. Yet due to the placement of this room -- a lone chamber behind a secret door -- I feel compelled to put something interesting here, in spite of that roll. So I turn to Al Krombach's "Random Area Name Generator" tables and come up with "The Petrified Pool of Death."

Room 39: Rolled monster with treasure, and got "carcass scavenger" on the Level 3 Wandering Monster Table. The carcass scavenger's Hoard Class is XXI; I rolled 8000 cp, 3000 sp, and 2000 gp for its treasure.

Now the finished key to this last group of rooms:

35. Spiked Pit Trap Room
The entire 20' x 20' floor of this room is a 20' deep spiked pit trap. A slight delay is built into the pit's triggering mechanism: the trap springs one round after the first being sets foot on the floor of the room. Anyone caught in the room when the trap springs falls into the pit, taking 2d6 falling damage plus 1d6 damage each from 1d4 spikes. The pit lid then instantly clamps shut and locks, trapping its victims within. The pit's lock can be picked by a thief or bypassed via knock; otherwise, it stays locked for 24 hours, at which time the trap resets and may be triggered from above once again. Note that those PCs bypassing the lock must also find a way to wedge the pit open to rescue their fellows, otherwise the lid slams shut and locks again in one round. Scattered amongst the spikes and decaying bodies on the pit floor is 1400 sp.

36. Throghrin Lair
A lone Throghrin dwells here. In addition to its usual abilities, it possesses a wraithblade, a +2 chaotic longsword which drains one life level or hit die (like a wraith's touch) per successful melee strike. The wraithblade's powers only work in the hands of a chaotic being; it is a mundane sword to all others. The Throghrin is aware of the concealed doors leading west into the Carnivorous Fly Lair in Room 37, and will retreat through those doors to seek the aid of the flies if seriously outnumbered or at combat disadvantage.

38. The Petrified Pool of Death
Even if the secret door to this room is found, it requires the key from the niche near Room 34 in order to be opened. The concave floor of this circular chamber makes clear that this place once contained a pool, long since dried up. A fine grey powder remains, coating the floor of this room. Anyone ingesting even the tiniest sample of this powder must save or die. The grey stuff kills by entering the bloodstream; if it is combined with oil or sap, it becomes adhesive and will stick to blades and arrowheads, forcing anyone whose skin is pierced by such edged weapons to save or die. There is enough powder on the floor to constitute six lethal doses; harvesting all of it takes three turns.

39. The Lurker in the Dark Stairwell
The stairwell here -- which leads down* to another dungeon level -- has a permanent darkness spell cast upon it, so the stairs themselves are difficult to navigate quickly and the ceiling crack (see below) is nigh impossible to see. In a small cavern behind a crack in the ceiling above the southernmost 10' section of stairs dwells a carcass scavenger (carrion crawler) which waits for parties to pass by underneath, then attacks the hindmost party member with its paralyzing tentacles. If successful, it devours its prey and retreats into the crack; if not, it fights but will retreat into the ceiling crack or flee northward if the melee turns against it. Hidden in the nook behind the ceiling crack is the carcass scavenger's treasure: 8000 cp, 3000 sp, and 2000 gp. 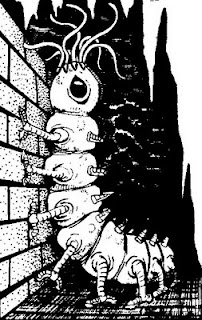 Stay tuned for a compilation pdf of the entire Level Key!

--
* Or up if you prefer -- see forthcoming post about my confusion over the "stairs up" / "stairs down" icons in AD&D mapping.