Alignment By Raggi (and Goodman)

Alignment in D&D has always somewhat vexed me. It is a concept I am still (after all these years) trying to make sense out of / make peace with.

Dedicated as I am to learning the Old Ways, I am really determined to try to come to grips with an exciting, generative interpretation of the "alignment" concept in D&D, specifically using the standard OD&D / Labyrinth Lord / B/X Threefold Alignment System, i.e., Law - Neutrality - Chaos only.

[Those interested in my prior statements / musings on this issue may consult this post on alignment languages in Ara, as well as my previous "State of the Union" on Arandish Campaign Alignment found here.]

As it happens, I was just discussing this very topic with Spawn of Endra last weekend. He and I were talking about what his character, Innominus, a Lawfully aligned Cleric, would do (or would feel most compelled to do) with the Chaotically aligned sword the party filched off the defeated Hobgoblin General back in Session 26 of our campaign. [We never quite answered that question.]

One thing I feel strongly is that each god or deity in Ara should be unique, and may have specific idiosyncrasies that do not quite "align" with the Threefold Alignment System. That is, gods and extraplanar beings may not necessarily have alignments.

That said, I DO want Law and Chaos to be palpable forces engaged in an ancient, cosmic battle in the "big picture" of my Lands of Ara campaign setting. This is not a specific idea that has existed in Ara prior to its current Labyrinth Lord-based iteration, but I am now looking for ways to integrate a big-picture conflict between two opposed cosmic principles into the game-world. Perhaps in time I will come up with specific names for these two opposed forces -- something like Ara (Law) vs. The Demon Plane (Chaos) -- but for now I want to puzzle it out using the game's default terms, Law - Neutrality - Chaos. 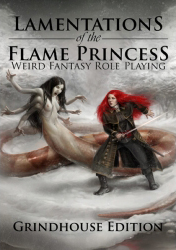 Enter James Raggi's LotFP Grindhouse Edition and its take on alignment, found on pp. 21-22 of the Rules and Magic book. Both Spawn and I took a look at that section during our talk last weekend, and lo! leave it to Raggi to cut through the bullshit and issue a concise, clear definition of how alignment can work in D&D:

"Alignment is a character's orientation on a cosmic scale. It has nothing to do with a character's allegiances, personality, morality, or actions. Alignments will mostly be used to determine how a character is affected by certain magical elements in the game."

I like that -- it is cosmic and "macro" rather than nitpicky and "micro." Raggi describes each alignment category as follows:

"Lawful: The universe has an ultimate, irrefutable truth, and a flawless, unchanging plan towards which all events inevitably march. As time moves on, all distraction and resistance to this plan falters until everything is in its perfect state forevermore, without alteration or the possibility of possibilities. Those who are Lawful in alignment are part of an inevitable destiny, but have no knowledge of what that destiny is and what their role will be in fulfilling it. So they are forever look for signs and omens to show them their proper way.

"Chaotic: The howling maelstrom beyond the veil of shadows and existence is the source of all magic. It bends and tears the fabric of the universe; it destroys all that seeks to be permanent. It allows great miracles as reality alters at the whim of those that can call the eldritch forces, and it causes great catastrophe as beings we call demons (and far, far worse) rip into our reality and lay waste to all. Everything that is made will be unmade. Nothing exists, and nothing can ever exist, not in a way that the cosmos can ever recognize. Those who are Chaotic in alignment are touched by magic, and consider the world in terms of ebbing and flowing energy, of eternal tides washing away the sand castles that great kings and mighty gods build for themselves. Many mortals who are so aligned desperately wish they were not.

"Neutral: To be Neutral is merely to exist between the forces of Law and Chaos. Mortal beings exist as Neutral creatures, and remain so throughout their existence unless taking specific steps (often unwittingly) to align themselves otherwise. In fact, most beings would be rather displeased with the notion of pure Law and Chaos, as they are defined in alignment terms. Even most who would claim allegiance to Law or Chaos are not actually Lawful or Chaotic. In the real world, every human being that has ever existed has been Neutral."

And lastly, Raggi's most provocative (and useful) declaration:

Clerics must be Lawful. Elves and Magic-Users must be Chaotic. All others are free to choose their alignment.

I hereby hork Raggi's notion that all clerics are Lawful, and that all magic-users and elves are Chaotic. Clerics follow the metaphysical "laws" of Ara, paying fealty to the gods. Magic-users and arcanists are messing with the "howling maelstrom beyond the veil of shadows and existence" that is Chaos.

As it happens, this ruling fits in beautifully with the history of arcane magic use on Ara, particularly its descent into "chaos" during the Old War.

And a postscript by Joseph Goodman [from an unrelated rpg geek thread] that really sums things up nicely:

Indeed! I think this captures the vibe I'm after quite nicely.