SPOILER ALERT: I will reveal one key fact about my in-progress Megadungeon Project in this post -- a fact that could spoil a major structural surprise for future delvers into that megadungeon. So if you are one of my regular players and would prefer to be totally surprised in a few years when we start playtesting this thing, you may not wish to read further. That said, the surprise revealed herein is rather general in nature and will probably be discovered by playtesters fairly rapidly I assume. So read away if you want. END SPOILER ALERT

It has be a little while since I made mention of my ongoing Megadungeon Design Project. Part of that has to do with my being in the earliest, rawest phases of the project; as I stated in my last update (in February), I am really just generating tons of maps, willy nilly, at this point. I am not even worrying about where exactly they will go or stocking them yet -- just mapping, mapping, mapping!

I have also become a bit sidetracked into preparing my tournament dungeon module for OSRCon in August, so the mapping and stocking of that dungeon has taken precedence over the long-term Megadungeon work.

But I saw a quasi-recent post of Talysman's about a dungeon concept he calls MegaChasm (I missed it during its original posting in April but caught it thanks to Dyson Logos' May 1st "Month of Awesome Maps" post) and felt compelled to say more about my own project.

One of the key questions Talysman asks in the MegaChasm post is:

What if you gave the PCs easy, central access to multiple levels of the dungeon, all at once?

Indeed, the big secret of my dungeon (or one of them anyway) is that it is a form of "open-access" megadungeon, where many levels (including some deep and dangerous ones) are available fairly immediately to adventurers finding their way into the dungeon (at least via its "main" entrance).  I was first introduced to D&D play via the Caves of Chaos and, like Jeff Rients, have been long fond of that sort of open-access design. The open-endedness of such a dungeon really speaks to me and is, IMO, one of the key things that sets tabletop RPG'ing apart from boardgames or even most computer games: players can opt to take on challenges technically "beyond" their level-based capabilities. Why the hell not? 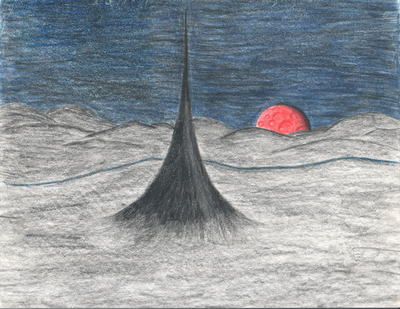 Exterior view of the Mornlyn Spire.  Artist unknown.
So the Mornlyn Megadungeon will offer just such a scheme, in a different layout than Talysman's MegaChasm tower, but along the same general lines. And since that is so -- since future players will potentially have immediate access to some of the megadungeon's lower levels right out of the gate -- I need to have some basic maps for many levels completed BEFORE I start letting PCs visit the place. As an old-schooler, I certainly will NOT stock the whole thing beforehand, or even map the entirety of each level, but major connection points and level entrances may need to be mapped before I can open the dungeon for business. This means that the Mornlyn Megadungeon will likely be first explored by my current gaming group's NEXT batch of player characters, after Innominus, Hazel, Dak, Yor, Vivuli and Uncle Junkal have accomplished epic deeds and retired. In other words, not until at least 2012 if not later.

Which is good -- I need all the time I can get!