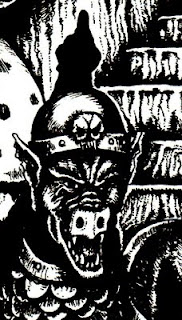 I've really had public RPG'ing on the brain lately, as I prepare for my first-ever public GM'ing experience at OSRCon in Toronto in August, then for the inception of my ongoing FLBS* old-school gaming group in September.

I have therefore been reviewing the available wisdom on the subject, including Jeff Rients' post on game store games, which says that:

The biggest thing you can do for yourself is to make nice with the store owner and/or manager. Get a date set with them a couple weeks beforehand and ask them to help recruit. Briefly explain the kind of game you have in mind and ask them to steer good folks your way while discouraging the turkeys.

This sounds like a very good piece of advice, so I am planning to implement it forthwith. Time for me to meet the owners of Lift Bridge Books!

Which means I should also start looking more closely at the Labyrinth Lord Demo Team requirements as well.**

In related news, I blogged recently about a teen D&D group that meets weekly at the local public library; in that post I note that I enjoyed meeting them but ultimately decided that their weekly meeting schedule and penchant for playing D&D IV were "deal-breakers" for me in terms of joining that group and subverting it to the Old Ways.

Then, just this week I was talking with one of my summer school students about video gaming, and the subject of D&D came up. This fellow was familiar with some of the D&D based PC games and had played both AD&D 2e and 3e in pen-and-paper format. I asked him about existing RPG'ing clubs on our college's campus, and he said he thought that while there is a student computer gaming club, he had no knowledge of any extant RPG'ing club. By the end of our conversation, he came right out and said that if I started such a thing, he would very likely participate.

Interestingly, I know of at least one other friend, a faculty member in another department, who has expressed a similar sentiment. This faculty friend of mine has never played D&D, only Vampire: The Masquerade and other White Wolf games, but he has told me he would jump in if I started an Old School D&D group. So that's two players onboard already, and I haven't even started the club!

So maybe my plan for a once-a-month public game at the bookstore in town will be supplemented by the institution of every-other-week "Old-School RPG Club" sessions somewhere on campus. It seems like I might be able to easily attract college types to such a game, if the data so far is indicative of future trends.

The bookshop game will be geared toward the general public, i.e., an all-ages crowd including extreme novices, and will likely favor one-off adventures (e.g., Tim Shorts' Knowledge Illuminates and other forthcoming entries in his "One-Shot Adventure" series).  The college club could meet more frequently (every other week maybe) and adopt a more campaigny feel -- if the latter plan pans out, I know exactly which module I would use to kick things off for that particular group.

Anyway, lots of options are presenting themselves here. Let's hope I can embrace them without driving myself too crazy or running out of time and energy.

--
* Favorite Local Book Store.
** I have checked out the LL Demo Team regulations and have come across two that may require my immediate action:

Identify which convention(s) you plan to attend, and be sure to note event submission deadlines. Report the convention to the Society Organizer, and when/if possible a link to the event schedule.

After each event, we ask that you submit a brief electronic report to the Society Organizer. The main purpose is to report in general how the game went and how you were received by your venue. Include any suggestions, things that were a challenge, or your plans for your next venue.

I had best report my planned participation in OSRCon to the LL Society Organizer ASAP! 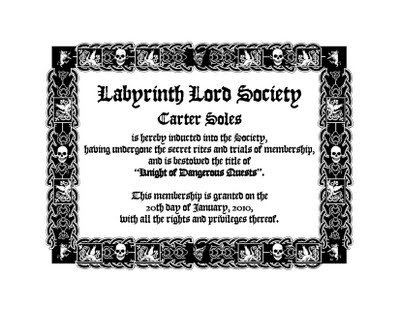