Now that I have DM'ed my first Con game, I find myself thinking about my equipment needs a bit differently. For example, in the olden days (the 1990s), I used to use a huge, classroom-sized white board for drawing maps and diagramming complex tactical encounters for my home RPG'ing group. Now that I DM exclusively from Skype, I don't do that anymore -- my big whiteboard is down in the garage. 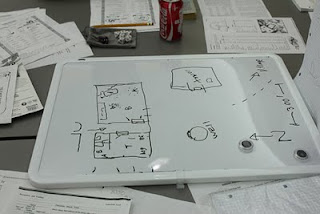 For OSRCon, I acquired a mini-whiteboard, and it worked really well during Con play for quickly drawing a room layout or diagramming a combat scenario. 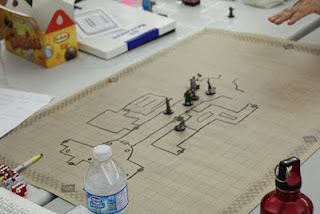 But then I got back from Toronto and saw the above picture of James Maliszeski's Crystal Caste "combat mat" and then read this comment where he tells exactly where to buy it [and more recently, some other folks have jumped on the trend].  I got really inspired by this, for I realized that a flexible mat like that would be great for on-the-road DM'ing, and it even has gridlines and hexes on alternate sides to boot.  So now, thirty bucks (with shipping) later, I have a flexible combat mat on its way to my house.

Oddly, at the time I ordered the mat, the revelation I share in the next paragraph literally did not occur to me at all.  It was not until after I ordered the mat and reflected upon my consumerist victory that this related idea emerged and I realized (too late!) that I may have inadvertently taken a step toward creating a huge monster.

For the purchase of this combat mat inevitably leads me to the topic of miniatures, an aspect of our beloved hobby with which I have never directly engaged.  Yes, you read that right, I have never owned nor painted a single miniature.  I have gamed a small handful of times using them, but only when someone else brought them along.  I don't dislike using them if they're on hand; I have just never felt the need to actively seek them out.  I have an ambivalent relationship with fantasy miniatures.

But now I have that damn battle mat coming, and there's also this recent news about a line of miniatures being released specifically to complement Labyrinth Lord. I have to admit, that second set of soon-to-be-released minis shown here, the "Level Two Monsters" box, looks kind of badassed: 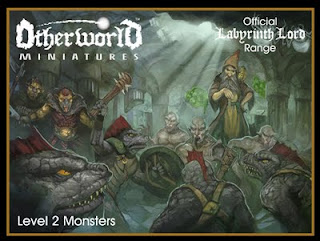 Includes 3 Gnolls, 3 Ghouls, 3 Zombies, 4 Troglodytes, 2 Shadows, 3 Large Crab Spiders, 3 Berserkers, 1 Green Slime, 1 Yellow Mold and an Evil Magic-User.
So should I invest in a few minis (for practical purposes if nothing else) since I have already thrown down for the combat mat?  Or is this how a horrible obsession starts?  It just seems like having a few minis to accompany the mat would make a smart combination of practical materials for quickly sorting out combat situations at Cons and the like, when (real-world) time is a factor.

I think the biggest down side to my collecting any minis at all is that I have no interest in painting them.  Sitting around painting minis does not (at this juncture) strike me as much of a good time.  But then again, once you buy them, have you not taken that critical first step toward the dark side?