LL Cleric = Powerful (and well it should be) 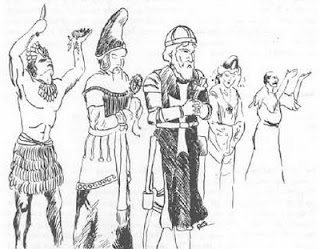 I ran my first ConstantCon game on Monday (play report forthcoming), and since we use Swords and Wizardry White Box rules for that, I got to talking with Spawn of Endra during the session about the relative power of the Cleric class across several D&D rules iterations and their retro-clones. It turns out that 1e AD&D and Labyrinth Lord favor giving clerics spells at first level, a privilege denied them by other systems like White Box, Swords and Wizardry in general, the LBBs, Holmes, and even Moldvay/Cook, upon which LL is primarily based!

Even James Raggi's LotFP Grindhouse, which has sparked much of my recent thinking on this matter, slightly de-powers the cleric from its LL / AD&D heights, NOT by denying clerics a spell at first level, but by making their Undead Turning ability into a spell. I think that is a very clever approach, and yet as I step back and reflect upon this whole cleric scenario, I find that in the end, I may actually prefer the "high-powered" cleric of LL and AD&D.

Well, this current campaign of mine is really the first time I have ever gamed with a cleric for any sustained period of time. I never realized how cool and versatile a class the Cleric was until this campaign. I will leave the particulars of my positive cleric experiences to our group's play reports and possibly Spawn (I am hoping he may eventually post on "The Cleric as Detective"), but I do want to note here why I think that clerics SHOULD be powerful, SHOULD get spells at first level as well as their Turn Undead ability.

It really boils down to their alignment, to whose team they're batting for. As I have recently outlined,

"All clerics, unless they serve demons or chaotic demigods, are aligned with Law. [. . .] Law is what 'naturally' occurs in one's home dimension, including its 'indigenous' gods, and Chaos always comes from without, crossing into a foreign dimension via the energies of Chaos." 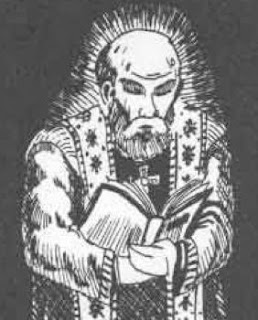 So Lawful clerics worship the gods local to this dimension, the so-called "True Gods" or even "Lawful Gods" -- though recall that, at least for me, deities are NOT bound by strict alignment guidelines -- so it follows that their magic should flow more easily and "naturally" here than do the arcane forces of inter-dimensional Chaos. Clerics play by local rules and accrue benefits therefrom. Magic-users tamper with inter-dimensional forces and so should have a harder (and more dangerous) time of it.

May the Arandish gods bless Dan Proctor for going with the slightly more potent AD&D-style cleric for Labyrinth Lord. I can see why some folks prefer the lower-powered OD&D cleric -- for tradition's sake, or because of the "prove their faith before being granted the ability to work miracles" angle -- but I think that, now that clerics and the Lands of Ara have finally met, the spell-at-first-level-having, undead-turning cleric of Labyrinth Lord suits my campaign's (developing and evolving) assumptions quite well.