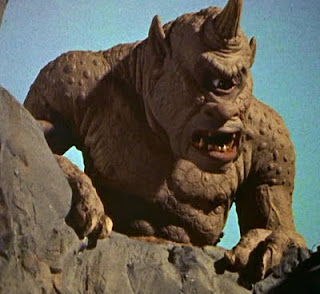 I recently obtained an awesome 3-DVD set of the Ray Harryhausen "Sinbad" movies: The 7th Voyage of Sinbad (1958), The Golden Voyage of Sinbad (1974) and Sinbad and the Eye of the Tiger (1977).  I dig all these movies (along with Clash of the Titans of course) and especially Harryhausen's monsters; my all-time favorite Harryhausen creations include the statue Talos from Jason and the Argonauts (1963), the baboon prince in Eye of the Tiger, and this awesome looking cyclops from 7th Voyage.

In celebration of this great cinematic creature, here are proposed B/X stats for it -- not substantially different from a standard D&D cyclops, but I figure those cloven hooves make him a bit lighter on his feet (hence the faster movement rate and lowered AC), plus there's his horn attack. 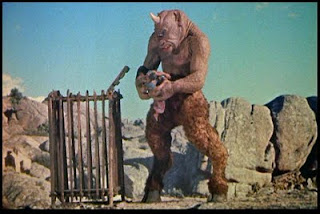 Indigenous to the Novellan Mountains of northern Telengard, the horned cyclops is in most respects identical to its non-horned brethren (see LL p. 69), except that this type may opt to attack with its horn, which inflicts 4d6 damage. 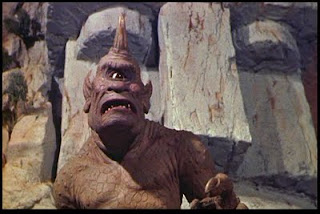 "Hi!  I'm from the Novellan Mountains!  Let me eat you for lunch!"