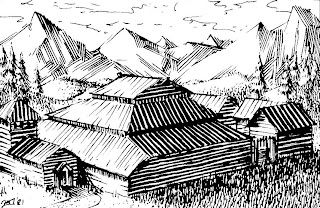 The northeastern Arandish kingdom of Telengard is a vast expanse of wasted high plains and harsh eastern mountain slopes that has never fully recovered from the ravages of the Old War. Most Telengardians are sheepherders, miners (some working for the dwarves of neighboring Gannar) or mercenaries, the latter typically venturing south into Delzar to fight on the Mizarian frontier. Due to threats from monsters and outlaws, the major towns and villages of Telengard are walled, and most traffic in and out of the lonely kingdom moves along the northern trade routes. Telengardian characters tend to be lean, cautious and tough, respecting individual strength of character more than political power or wealth.

With twice the land area yet half the population of Noffel, Telengard nevertheless subsists largely on the taxation of dwarven goods coming from the east, iron mining, and sheepherding.  Lacking abundant fertile farmland, Telengard must trade with its wealthier neighbor (and former enemy) Achelon, and its southern neighbor Delzar, for many staple agricultural goods.  Telengardians are at peace with Achelon and few Telengardians hold Old-War related grudges, but there are certain proud locals who view Achelon as a rich, pampered country unworthy of Telengard's respect.  Due to its proximity to Gannar, Telengard has a particularly large dwarven population, many of whom serve key roles in local Telegardian town and regional governments.  This is also a region where goblins as Player Characters (an idea brought to my attention by James M. at Grognardia) could come into play.  Very few rodians venture this far north, however -- the climate does not agree with them.

The Telengardian Roughriders
The Roughriders are a well-trained and highly disciplined group of horse-mounted fighters and rangers who patrol Telengard's borders and wilderness areas in small (1-4 man) patrols.  The Roughriders technically take their orders from the king of Telengard, but in practice, each Roughrider precinct (based out of a different Telengardian town or city, the largest being from Ironcrown) exercises a fair amount of autonomy in establishing its regular patrol routes and keeping its region safe.  Originally established at the end of the Old War to hold Telengard's borders against Achelon and to hunt down any renegade Dark Magicians still at large, the Telengardian Roughriders are nowadays mostly kept busy saving citizens and travellers from local monsters and brigands.  Roughriders help maintain the northern east-west leg of the Endyn Trade Route and are easily found there, but their jurisdiction includes all of Telengard, including the region of the deadly Ghardash Wilderness.


The Ghardash Wilderness
The most dreaded wilderness area in Ara, and perhaps the single most dangerous region in Ara, the famed Ghardash Wilderness is actually a relatively small area in north-central Telengard, nestled against the southern slopes of the Novellan Mountains between the fortress city of Ironcrown (to the south and west) and the northeastern dwarven mountain kingdom of Gannar (due east).  The Ghardash Wilderness is where many of the strangest and most deadly monsters summoned to Ara during the Old War eventually settled, and therefore, unlike most other Arandish adventure locations, few humans are to be found within its environs.  Even certain low-level monsters think twice before settling in Ghardash.  Also, don't forget that Razgar the Red Dragon inhabits this area as well. . .