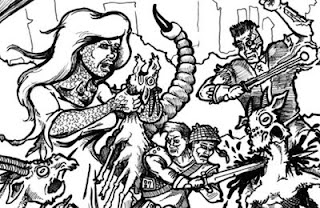 Note: what follows is a report on last night's Mutant Future session from a player's perspective (mine). For the Mutant Lord's POV plus lots of fascinating background information, see Carl's blog.

Last night was Mutant Future night, and we had a somewhat thinner turnout than usual -- just three players plus our Mutant Lord.  I won't go into extreme detail about what we accomplished or did not accomplish -- I'll leave that to Carl -- but I want to reflect briefly on the phenomenon of real-world occurrences having a deep impact upon what unfolds in the game.

The party had returned to our "home base" town of Skinny Butt and were trying to establish an inroad to disrupting the balance of power between a few local groups: two warring factions of militaristic apes (recently escaped from Carl's megadungeon complex), and some peace-loving mutant badgers (called badders) whom my character Dataan is particularly friendly with (since we all worship Glargorion).  Since the PC party had fewer players than usual, and none of our usual mind-readers / empath characters showed up, we were in a situation where diplomacy was not going to be as effective for us as usual, yet we felt a need to intervene and stop the warlike primates from overrunning the badder's town.  So we snuck into the invaders' underground tunnel and played a commando-style session, sabotaging their vehicles, attacking them from heavy cover, and sending confusing messages over their comm-link system (a favorite activity of Dataan's).  By the end of the session, we had killed maybe four warangutans and confused a good many others, and one of our three party members was unconscious and very near death.  My synthetic android character Dataan never even entered the fray directly, but rather spied, stole a jeep, and shot some machine-guns using a remote-controlled spider-bot.  We did not have the strength in numbers we needed to mount a frontal assault on these guys --  an action I believe we may need to take next session, in order to press our advantage now that we have them confused and in retreat.  Hopefully more of our group members will be available to play next week.

But the point is, in a game where "balance" and "fairness" are valued, this situation might have seemed unjust, unacceptable, and possibly paralyzing to a party with a gamist agenda.  There was no way for us to defeat these well-armed warangutans who decisively outnumbered and outgunned us (not to mention their Terminator-esque robot friend).  But we made do with what we had, and even given our somewhat limited resources and my own character's physical cowardice, we actually wreaked some decent havoc there for several rounds, and managed to temporarily divert the bad guys from their immediate goal, i.e., blasting their way into the sub-levels of the fortress of Dataan's former masters, the Ooh-Oh Monks.  It was a deeply satisfying session, in large part because since we were under-staffed (i.e., three or four of our usual players could not show up for the session) we had to THINK and STRATEGIZE and INVENT ways to tackle our in-game challenges that much more intensely.  We had to develop an alternative strategy based upon our circumstances.  This kind of inventive response to "unfair" or uncontrollable factors is part of what sets the old-school RPG'ing experience apart for me, and I always welcome chances to play sessions where the risk factor is high (three players vs. multiple warangutan squads), much is at stake (the Ooh-Oh Monks are about to get reamed), and we have to use our party resouces wisely in order to accomplish anything and/or evade death (our commando-style approach to the session).

THANKS again to Mutant Lord Carl and my fellow players Danny and James for a killer session!