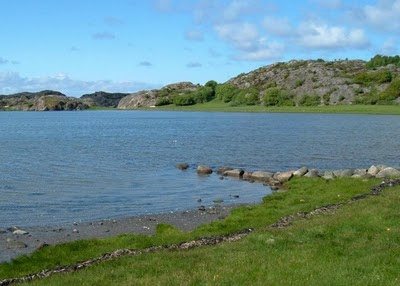 The Blintian West Coast south of Blintsport.
Originally titled "Blint - Peaceful Valleys and Oceanfront Estates" but for some reason never published, this post has languished in my blogger "drafts" folder for over a year.

Interestingly, this situation is reflective of the in-game status of Blint, a southern kingdom of the Lands of Ara that has literally never been visited by any group of adventuring gamers I have ever played with. Blint thus remains a "theoretical" land, a place where no actual game play has ever taken place. It is possible that Dave* and I set Blint up to be ignored: I remember clearly that when we first wrote up our brief sketches of each Land of Ara in 1989 or thereabouts, we referred to Blint simply as a "peasant podunk shithole."

Yet most of the current Arandish Campaign** has taken place in southwestern Minoch, which borders on Blint. So if the party ever wishes to head further west to the Bay of Noffel, it is highly likely that they will travel through Blint.

The lush valleys of Blint were first settled in the late 190s through the mid-200's (Old Calendar) by Minars wandering from the east and northwest in search of kapar (copper). However, the trollish invasions of Old Calendar year 392 and the Great Catastrophe that wiped out most of the population of Minoch around year 787 cut off the Blintian settlers from their original migratory ancestors to the east.

In latter days, the beautiful rolling hills of Blint attracted emigres from Noffel, especially rich nobles looking for warmer climes in which to spend their winters. For many decades, Blint was treated as little more than a southern duchy of Noffel, and some contemporary Noffellians still look upon Blint as a geographicaly desirable but culturally inferior annex to the Kingdom of Noffel.

Blint today is a rural kingdom largely populated by farmers, peasants and craftsmen. Blint supports no magical guilds, though as is often the case in rural areas, humans here can obtain basic magical instruction from magicians who live here. Blintians, known as proficient spearmen, archers, and polearm users, are fiercely proud of their militia, which ultimately (still) owes its allegiance to the High Senate of Noffel. This creates simultaneous feelings of fellowship and rivalry between Noffellian and Blintian warriors. As mentioned before, some Noffellians have a tendency to view Blint as an uncivilized backwater of Noffel. Blintians resent this stereotype and attempt to disprove it when encountering natives of Noffel and other kingdoms.

Yet a great many Noffellian aristocrats have seafront property in Blint - winter homes and the like.

The Blintian capitol city, Blintsport, is home to a thriving and prosperous whaling industry, which I proclaimed in this post, saying that:

"whaling surely could be a staple industry in seafaring Arandish kingdoms like Noffel, Blint, and Suhl.  [. . .]  Blint is to Arandish whaling what Nantucket is to U.S. whaling in Moby Dick: its veritable capitol.  So Blint's largest seaport city, Blintsport, is hereby a center of the whaling industry in the Bay of Noffel."

Blint's flag depicts the sun rising over the blue waves of the sea.  This is a variation upon the Noffellian flag, which depicts a shining silver long sword gleaming in the air above the blue surface of the sea. (The Noffellian flag is thus often referred to as "the sword and sea," and Blint's as "the sun and sea.") The Blintian Poleaxe Corps (the official name for the Blintian militia) flies a battle flag with the sun and sea overlaid with crossed poleaxes, the favored weapon of the Blintian soldier.

*Dave Miller, the co-creator of the home-brewed RPG Crimson Blades of Ara.
**Back in January 2010, a group of gamers and I started a Labyrinth Lord game exploring the Lands of Ara, a campaign which is still going strong.