As is well known to regular readers, I love dimetrodons. I love ALL dinosaurs really, but dimetrodon -- which is not technically a dinosaur but a "prehistoric synapsid" -- has always been a particular favorite. That sail on its back gets me every time.

So as the first portion of my present celebration of Dimetrodon, I want to offer this new "flying" variant, statted for use in old-school versions of D&D.* 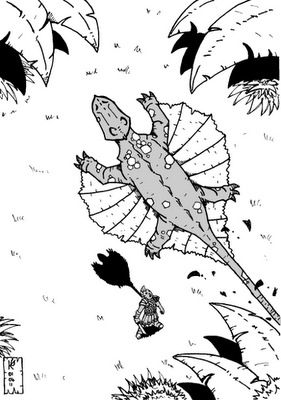 The dreaded tree- and cliff-dwelling Flying Dimetrodon "flies" in the same sense that a flying squirrel does: it has a membranous webbing along its sides that allows it to glide through the air. A Flying Dimetrodon may only fly for short distances; its favorite tactic is to glide down upon unsuspecting victims. It is 8-9' long, just a wee bit smaller than a standard, ground-dwelling Dimetrodon.

Up next, both for the sake of contrast and to consolidate all the relevant Dimetrodon variants into one convenient post, I hereby reproduce the "basic" Dimetrodon as originally presented by Moldvay/Cook in The Isle of Dread p. 29: 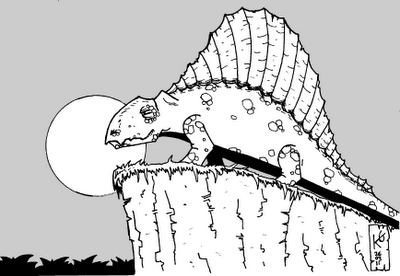 A dimetrodon is a sail-backed, meat-eating dinosaur. The "sail" is a comb of long bony spines connected with a skin webbing. The dimetrodon is about 10' long and weighs nearly a ton. Dimetrodons hunt most often in hills and in the drier areas of swamps. 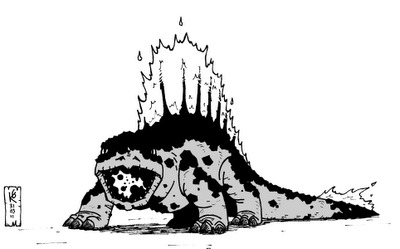 This 9' long flaming-sail-backed reptile is fiercely territorial. It is a voracious meat-eater often found in mated pairs or small packs. It is impervious to flame-based attacks. Its breath weapon, usable 3 times per day, emits a cone of flame 60' long and 20' wide which inflicts a number of hp damage equal to the creature's total number of hp when the attack occurs (save vs. breath attack = half damage).

And lastly, my own first take on the Dimetrodon, slightly re-edited and now re-dubbed the "Aquatic Dimetrodon": 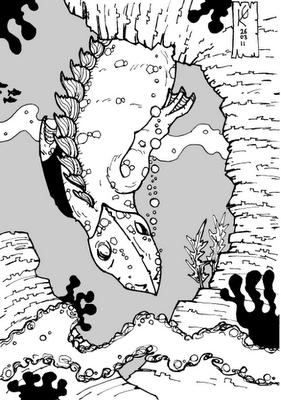 This 9' long sail-backed reptile is fiercely territorial and can swim. It is a voracious meat-eater often found in mated pairs or small packs.  It breathes air but may stay underwater for up to ten minutes at a time.

[FINAL NOTE: Special thanks to Kelvin Green, who created all four of the wonderful dimetrodon illustrations above.  Kelvin also deserves the credit for coming up with the flaming sail for the fire-breathing dimetrodon, which is utterly badass.  Kudos Kelvin!]

* By statted I mean I have generated numerical game "stats" (statistics) for the creature so that it can be used in-game. By old-school editions of D&D I specifically mean Labyrinth Lord, the retro-clone that I play, but this term indicates that this monster would work in any first-edition D&D ruleset, including "Original" 1974 D&D, B/X D&D [which Labyrinth Lord clones], AD&D, Swords and Wizardry, OSRIC, etc. See this glossary for more information on these kinds of abbreviations.