F for Fight On!

[Note 1: Any non-gamers tuning in to this series of posts are invited to consult my New Reader Introduction for some RPG-specific definitions and a general introduction to the Lands of Ara blog. I also provide a few explanatory footnotes herein, which RPG'ing veterans may feel free to ignore.]

[Note 2: This overview of the Fight On! Old-School Fanzine does NOT take into account Fight On! Issue #11, which I just received in the mail three days ago. I will review Issue #11 separately sometime in May.]

On the same page (p. 36) as the "Afterward" [sic] of The Underworld and Wilderness Adventures, the third volume of the Original D&D booklets published in 1974 by Gary Gygax and Dave Arneson, appears a line drawing of a warrior with raised sword accompanied by the phrase "Fight On!" It is from this source that the OSR's premier fanzine takes its name.*

And I am here to tell you that the Fight On! OSR fanzine surely kicks major ass. 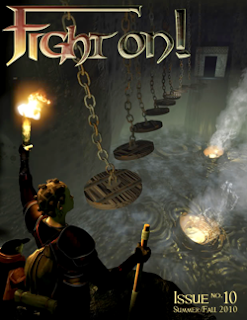 FO #10, my third-favorite FO cover, by Patrick Sean Farley.
In my previous review of Peter Regan's excellent OSR fanzine Oubliette, I used Fight On! as a point of frequent comparison.  At certain points in that review, I may have unintentionally conveyed that I find Fight On! lacking in some ways.  I most certainly do not.  I consider Fight On! to be the flagship periodical of the OSR, a remarkably ambitious, often impressively voluminous, and always high-quality product. Since its inception, Fight On! has topped the heap of OSR products, production value-wise; the mag maintains a very high standard of thoughtfully designed, inspiring, and useful gaming content.  Even the very first issue, while not as glossy and fancied-up as the ones that follow, still packs a lot of punch and certainly delivers a classic if minimalistic front cover image to inaugurate the periodical's run.

FO #1, my fourth-favorite FO cover image, by Andrew Reyes.
At the ed of this post I will list my top five all-time favorite issues of Fight On!, but let me first single out a few tidbits and articles from across the magazine's run that showcase the high quality of what editor Ignatius Umlaut is making available here.

First, the magazine's cover art from about Issue 4 onward is fantastic, and a few of the covers (those depicted in this post) really take my breath away -- especially the crazy Mark Allen cover of Issue #6!  Fight On! is a magazine I am proud to read in restaurants and airports.  Its production values and cover art are so professional as to even look quite "artsy" in certain instances.  To put it simply, Fight On! is a consistently fine looking print product.

Next, let me mention a few of Fight On's best all-time articles. Calithena's two pieces about sandbox and campaign creation, "Setting Up Your Sandbox" (Issue #1) and "In My World..." (Issue #9) are standouts. These two essays -- I'm especially fond of the second one -- cover these much-discussed topics with great efficiency and user-friendliness, maintaining a pitch-perfect tone of enthusiasm and encouragement. On a similar topic, Michael Shorten's "Dispelling a Myth: Sandbox Preparation" (Issue #6) is another superb essay, knocking out six "bullet point" strategies for effective and efficient sandbox creation. Every world-creator and DM should have these six ideas posted in plain sight when working on his or her campaign setting.

On the subject of dungeon mapping, my all-time favorite article by the always energetic Jeff Rients is "Holy Crap! I Need a Dungeon RIGHT NOW!" (Issue #6) which I discussed in my post about megadungeon mapping.

Most of the adventures and megadungeon levels printed in Fight On! are quite good, a few standouts being "Beware the Lord of Eyes" by Allan Grohe (Issue #7), "The Mysterious Crystal Hemisphere" by James Maliszewski (Issue #4) and almost any adventure or adventure locale by the prolific and inventive Gabor Lux, especially "Temple of the Sea Demon" in Issue #7, "I Thirst" in Issue #8, and the useful desert locale "Stone Gullet" in Issue #6.

Last, I would be remiss if I did not mention the editorial skills of Ignatius Umlaut. Sure, some of the individual offerings in Fight On! look more "low tech" than others, and there is some small variance in the quality of the interior artwork from time to time. But these aspects are part of the charm of an "Old-School Fanzine," and any fanzine that smoothed off all its rough edges would be a boring publication indeed. The OSR is by its nature varied, D.I.Y., and (in many cases) low-rent and low-tech, and that is part of its uniqueness and strength. Thus those qualities SHOULD be reflected in the movement's primary fanzine. In general, the layout, editorial choices, and consistently high standards around the cover art and content of Fight On! set a very high bar indeed -- and will keep me buying every issue of this excellent publication.

The main challenge Fight On! faces is that, as the "go-to" periodical for (what I presume to be) a large number of old-school gamers, the fanzine is in the difficult position of trying to fill a variety of needs across a potentially very wide gaming (and genre) spectrum.  While it generally maintains system neutrality, FO! tends to focus on edition-zero D&D and its clones, with a little bit of Mutant Future and post-apocalyptic content thrown in as well.**  Due to its wide array of contributors and focus on at least two main genres (maybe more if we parse out high fantasy, swords and sorcery, swords and planets, and Carcosa-esque weird fantasy as separate genres), the exact appeal of each issue can vary a bit.  There are some offerings in Fight On! that are plainly brilliant but that I would not be likely to use, because their flavor is at odds with that of my home campaign setting. Yet I want to make clear that the breadth and inclusiveness of Fight On! is its strength, and even if that broadness of scope occasionally reduces the total use-value of the magazine's contents for me personally, I would not change this aspect of the fanzine.

As a counterexample, Oubliette can afford to be much more specific (i.e., it focuses on content for Gygaxian naturalist Labyrinth Lord campaigns), because its ambitions are more humble than Fight On!'s. In both cases, this breadth or narrowness of scope is by design. The variety between these two fanzines' approaches is why I read them both.

As Fight On! editor Ignatius Umlaut says in an introductory column in Issue #1,

If it is anything, Fight On! is a magazine devoted to preserving all these threads of old-school gaming, and to sustaining what's left of and perhaps even building up a little more of that old greater community we all started from before we began to wander down our separate paths. We welcome creative contributions from all games and all styles of play. Even those who work in more current systems might find useful material here, or even enjoy writing for us, freed of most of the burdens of game-mechanical characterization of your creations.

Umlaut must surely be aware by now that his magazine has succeeded at its aim of unifying a broad community of gamers, that it has become a focal point for the OSR writ large.  I would suggest, for example, that the breadth of its contributors and its numerous tie-in articles that provide stocked levels for the collaborative The Darkness Beneath project (see megadungeon.net) provide evidence of that success.  To maintain its ambitious scope, the magazine must keep its appeal somewhat broad and continue to offer a wide array of (more or less) system-free old-school content. For the time being, Fight On! seems to have found its niche and is turning out the best fanzine in the business.

And now, my personal Top 5 Issues of Fight On!

6. Honorable Mention:  Not quite squeezing into the Top 5 but worthy of Honorable Mention is issue #4, dedicated to David A. Hargrave and including the noteworthy offerings "The Tower of Duvan'Ku" by James Raggi, "Random Rooms" by Michael Curtis, the classic "Carousing Mishaps" table by Jeff Rients, and "The Mysterious Crystal Hemisphere," a great adventure scenario starring the Thelidu, James Maliszewski's Mind Flayer variant.***

My fifth favorite FO cover, FO #7, by Peter Mullen.
5.  Issue #7, which is dedicatd to M.A.R. Barker and Tekumel, contains some of the best adventure scenarios in Fight On's history, including Allan "Grodog" Grohe's "Beware the Lord of Eyes" and Gabor Lux's "Temple of the Sea Demon."  It also has a very interesting article about "D&D Camp" (who knew?) and a great essay on finding new players by James Raggi.

3.  Issue #1, dedicated to E. Gary Gygax, remains one of my favorites.  Thinner than subsequent issues yet chock full of goodness, this key issue includes Calithena's aforementioned "Setting Up Your Sandbox," Makofan's superb adventure locale "Nature's Nasty Node" (complete with random tables for generating more nodes!), Jeff Rients et. al.'s "Flexible Sorcery," and my favorite of Kesher's "The Devil's in the Details" columns, the one on Dwarves.  Also two great adventures: Gabor Lux's "The Tomb Complex of Ymmu M'Kursa" and James Maliszewski's "The Ruined Monastery."  Quite a bargain at only $6.99 (print).

My second-favorite FO cover, by the legendary Erol Otus.
2.  Issue #8, dedicated to Erol Otus.  EO is my favorite "classic" old-school D&D artist, and the interview with him in this issue revealed much about his career and non-D&D related art activities that I did not know before.  This issue also features Jeff Rients' thought-provoking "Experience for Exploration," Gabor Lux's evocative, minimalistic adventure "I Thirst,"  Zak Sabbath's "Hidden NPC Trait Table" (well worth a look!), and Tim Snider's "Insectaurs and Masterminds," presenting two very cool new races for Mutant Future.  In addition to all this is Tavis Allison's really insightful article "Random Events Make You Say Yes," which covers a classic old-school gaming precept -- that randomness is good -- with fresh eyes and an insightful perspective, drawing upon (amongst other things) improvisational acting theory!  An excellent read and a most valuable issue.

My all-time favorite FO cover, #6, by Mark Allen.
1.  My favorite Issue is #6 (dedicated to Lee Gold), and not just because it happens to sport my favorite cover to date.  No, it's the content: Rients' indispensable "Holy Crap! I Need A Dungeon RIGHT NOW!" mapping method, Lux's "Stone Gullet," Calithena's "Variant Races," Shorten's "Sandbox Preparation," and a really quirky but compelling adventure by Tony Rosten, "Blocks of Quox."  Michael Curtis' "A Few for the Road" deserves mention, as a mini-sourcebook for interesting road encounters.  Ron Edwards' rant "Naked Went the Gamer" provides a spirited punctuation mark late in the issue.  All in all, a total triumph, and highly recommended!

* OSR: Variously "Old School Renaissance," "Old School Roleplaying," and/or "Old School Rules." This is a highly contested term; my favorite rundown of its various permutations and its history begins here, though please note that many old-school gaming bloggers take issue with austrodavicus' account, as will be apparent in the comments.

** Edition-Zero D&D: Refers to the Original D&D game rules released in 1974, plus other editions (especially Holmes Basic, B/X, and 1st Edition AD&D) and clones (like Swords and Wizardry and Labyrinth Lord) which are highly compatible with it.