Last session, the group paid to have Hazel and Gorgo raised from the dead by Father Ouzo of the Brothers of Carcoon; Innominus also was recovering from a recent cessation of life (and miraculous revivification). Thus the remaining PCs had a two-week hiatus to spend in Farn Junction; they could do as they pleased while the recently dead recovered. The party's tentative plan thereafter was to head north to Kaladar, where their NPC companions Gark (Dwf 4) and Zappo (MU 3) awaited them, with the corpse of Sir Boren of Achelon.

Dak, already a local Farn Junction favorite at the Stone Mountain Inn, began visiting other pubs, dropping 5 gp per day on food and drink and seeking affluent dwarves with whom he could converse about regional politics and recent local rumors. While subtly promoting the "Dwarves for Minochian Government" cause around town, he learned some additional details about the recent "hauntings" in a nearby dwarven mine. To wit:

1. Five local dwarven miners disappeared approximately four weeks ago (on or around Day 72 of the PC's adventures) in an incident involving some deep mining in a region considered by superstitious types to be "haunted."

2. The mining company in charge, Frigglestone Brothers Ltd., has been tight-lipped about the cause of the disappearances, stating only that an investigation is underway. Some locals think that the company is covering its ass because the area was unsafe to mine in the first place and the missing miners were likely killed in a cave-in; others swear that the vanished miners must have been abducted by ghosts or malevolent spirits.

As it turns out, Yor's family, who runs another local mining concern, knows the Frigglestone family personally, so he asked his old comrade-in-arms (and current employee) Darvey to visit the Frigglestone Bros. mine and offer his services as a consulting inspector.

Meanwhile, Vivuli spent his two weeks in town pickpocketing rich-looking travelers, using his recently acquired ring of X-ray vision to select targets laden with gold and valuables. His single greatest feat was lifting a magical shield off the back of a passing fighter. In a similar (but more legal) vein, Uncle Junkal did what he does best: busking on the street for money. Both the assassin and the bard made off with tidy profits while their dwarven friends conducted their inquiries and their other companions rested.

The two-week rest period ended on Day 103 of the party's Arandish adventures. Since the group started its exploits in Swampsedge in late summer, this places the group in late fall of New Calendar year 1283. Weather is getting colder; winter is not far off.

Before leaving for Kaladar, some of the recently recovered PCs decided to ask around Farn Junction for more rumors, and learned that Prince Arkus of Minoch would be passing through town the next day on his way southward to Fortinbras. A public speech was planned. The PCs decided to linger around town one additional day in order to gather intelligence on the Northern Minochian Prince, who has designs on uniting all of Minoch under his own rule.

The day of the Prince's arrival, Uncle Junkal made inquiries to find out who was the monarch's closest adviser. The answer: Grand Vizier Krock, a tall, intellectual fellow with a pointy beard and eyeglasses. Krock would be the one making all of the logistical arrangements around the public speech, so as soon as the Prince's party arrived in town, Uncle Junkal sought out the vizier and successfully charmed him.

Meanwhile, the other PCs decided to take advantage of the throngs of people arriving in the city to attend the Prince's address by setting up a public cockfight. Yor and Dak rounded up local dwarven cockfighters (see Yor's epigraph at the head of this post) and set up a betting pool; Dak spent more cash on free beer with which to get key bettors drunk, impairing their judgment. The main event of the day, conducted just moments before the Prince's scheduled speech time, was a Giant Chicken Cockfight: Innominus cast Animal Growth on two particularly fierce fighting cocks and then the climactic battle was staged. All in all, the party took in 1800 gp and 1100 sp from their day's efforts.

The PCs moved with the general masses into Farn Junction's central town square. The Prince, his entourage, and a cadre of elite guards wearing the Arkus colors of saffron and crimson, were gathered on a raised podium at the east side of the square.

In the moments just before Prince Arkus' speech was to begin, Hazel cast her ESP spell and directed her mental attention toward the Prince. She noticed that his thoughts were mostly on the southern Minochian town of Fortinbras: he imagined his own flag flying over the late Baron Kaminster's mansion, and pictured himself tearing out the Baron's vegetable garden. It was clear from his thoughts that the northern Prince was no fan of the Kaminster family and looked forward to assuming control of their former lands.

As the Prince's speech got underway, Uncle Junkal stayed near the charmed Grand Vizier, interspersing minor entertainments with suggestions to the royal adviser about how to think about the gathered crowds, especially the somewhat restive dwarven contingent. Many gathered dwarves openly booed the Prince's points; meanwhile the wily bard advised the Vizier to take the dwarven complaints seriously, and to urge his royal master to do the same. The rodian subtly suggested that a coalition government incorporating local dwarves would likely quell any overt resistance to the Prince's rule of the region. Grand Vizier Krock seemed quite receptive to the ideas of the latest member of his personal entourage.

While Uncle Junkal influenced the Vizier and Hazel tracked the Prince's thoughts, the other PCs worked the crowd, Viv with his ring of x-ray vision and Innominus using Know Alignment. It did not take them long to single out a couple of large, hooded, humanoid-looking creatures standing at two separate positions near the back of the gathered crowd. The Cleric of Endra instantly knew them for servants of Chaos, and his familiar Beastarr noted that they smelled very strange indeed: kind of salty. Viv was able to see that under their voluminous robes, they seemed to be hunching down quite severely, attempting to conceal their true (much larger) size. They were somewhat lizard-like or saurian in appearance, and very dark, possibly even black, in color.

Hazel directed her ESP at one of these creatures, finding that the thing did not (appear to) have much depth of thought; it seemed entirely focused on the singular concept of "kill." That is, a generalized feeling of hate and destructiveness was about all the telepathic magic-user could pick up from the being initially. She next cast ventriloquism and started whispering certain questions and words into the being's ear from a distance:

"Who's your master?" revealed that the creature literally seemed unable to fathom the concept of "master."

"What are you doing here?" produced its baseline "kill" thought-response.

"Home" made the thing picture a landscape completely overrun with pools of red-hot magma, with a horrifying, shudder-producing thing flying overhead.

In the square, while Yor gathered some dwarves to help him flank both cloaked creatures, Dak stepped forward and drunkenly yet deliberately bumped into one of the saurians, pickpocketing it in the process. He succeeded, coming away with a pouch that seemed to be made from human (or demi-human) skin.

Deciding to go fully on the offensive, Innominus cast command and then commanded the nearest cloaked saurian to "die." The spell was apparently ineffective, but it provoked the creature, which threw back its robe and leaped through the air at the party. It was a huge 12' tall bat-winged thing with vicious claws and a whip. Its companion also uncloaked and headed for the fray.

However, in rapid succession, each saurian was paralyzed by Hazel's wand and then beheaded by the party. In three or four rounds, both saurians lay dead and decapitated in the Farn Junction square, and, thanks to some persuasive talk by Uncle Junkal to Grand Vizier Krock, were being hailed as "dwarvish heroes who killed the demons and saved Prince Arkus' life."

As a coda, since her wand of paralyzation had incidentally frozen a few bystanders during the saurian battle, Hazel discreetly turned herself invisible and then pickpocketed the crap out of a number of immobilized locals.

And that is roughly where the session ended.

DM's Notes
Frankly, this is the type of session I like best: intrigue-heavy and combat-light. Not that I don't enjoy a good melee fracas as much as the next RPG'er, but like Christian, I am in this hobby primarily for the story generating and role-playing aspects. Plus these types of sessions make for more interesting and thorough session reports, as it is hard to keep track of every single significant action in the heat of a pitched battle. 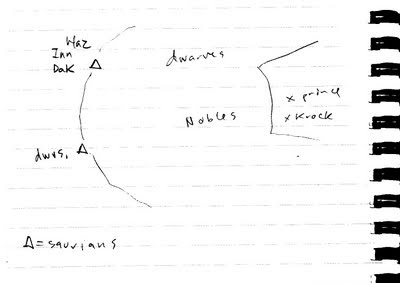 Next session: Vornheim meets the Free City of Kaladar??

--
* Uncle Junkal broke his dissertation-related gaming hiatus for this one session, presumably because I was on the West Coast for a week-long visit and ran this session in person.