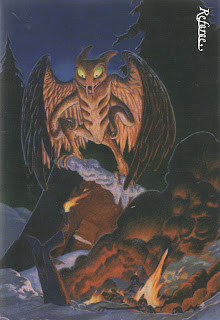 This is Part 3 of a three-part review of James Raggi's Lamentations of the Flame Princess Weird Fantasy Role-Playing Grindhouse Edition. Part 1 reviewed the game's Tutorial book; Part 2 the Rules and Magic volume. This third and final installment will discuss Referee. [Note: This review will NOT take in "A Stranger Storm," the adventure included on pp. 77-95 of Referee.]

First, the cover. While I stated in my review of Tutorial that I liked its cover the most of the three Grindhouse tomes, Peter Mullen's superb cover of Referee may give that one a run for its money. Mullen has a lively, vaguely Erol Otus-esque style that really jumps off the page, and his Referee cover captures quite an interesting moment indeed. Well done!

The Referee book itself opens with prose I tend to associate with Raggi's writings on the Lamentations of the Flame Princess blog. He even admits right at the outset of the Referee volume that "this book is much more loosely written than the other material in this game. This is me, the author, James Edwrad Raggi IV, talking to you, the reader." Hooray for that! In some ways, this is the kind of prose that I have been waiting for (but have seen less of) in the other volumes of the game. If I am going to invest in James Raggi's Grindhouse game, I surely expect to get a healthy dose of James Raggi's unique gaming worldview and balls-out expository style. While the Grindhouse rules themselves (and of course the notorious illos) are obviously an expression of Raggi's POV, the first two rule books are written in a very straightforward way, for clarity, and while that is a plus when it comes to understanding the rules, it is a minus for those of us who enjoy and take inspiration from Raggi's usual no-holds-barred writerly voice.*

This Referee book is chock-full of that engaging voice plus a wealth of insightful perspectives on what it means to be an effective old-school referee.  In fact, should I wish to produce a non-system-specific "Primer on Old-School Refereeing," I could do a lot worse than to simply excerpt out pp. 2-6, 11-33, 45-46, and 62-68 from this volume.  It's that good.

After a page of introductory remarks, the Referee tome launches right into the basics of Refereeing, covering a wide array of relevant topics of which I will simply gloss over some favorite highlights:

- "When the dice go badly for the players, they should be thinking about how to not let a roll of the die be the sole determiner of their fates. And when the dice go a little too well for the players, the Referee should note what he needs to do to prevent a single die roll from determining the course of an entire adventure" (p.18). Raggi is nothing if not fair-minded, strongly advocating the roll of the dice over Referee fiat. No fudging the dice!

- "In-character favors and personal connections are a type of reward that isn't commonly used in this sort of game, but in a continuing campaign this could be extremely valuable" (p. 19). I use these kinds of "rewards" all the time, and appreciate Raggi mentioning them here.

- The whole section on "Variety" (pp. 19-20) is just golden, containing advice like: "Change elements of your adventures, and change them often. [. . .] Keeping a campaign fresh through constant variety is the key to maintaining interest, for the players and for yourself." Indeed! This is an important idea yet is not always given this much emphasis in other RPG'ing rulebooks I've seen.

"My adventures and campaigns will have no pre-set endings. Characters are not required to act as I wish them to act during the course of the game. It is natural player behavior to trash scenarios and take the game to places unforeseen."

He even prints this a second time, exhorting the reader to recite it aloud. Raggi means business here, and this is absolutely the right thing to emphasize. I only wish I had read (and recited aloud) these words back in 1992 or so; it would have saved me a few disastrous sessions during that heady period.

- In his section on "Using Published Adventures" (pp. 31-32), which I appreciated a lot, Raggi makes the following important observation: "Some referees are great creative thinkers and make excellent adventures, but not every Referee can manage these things. Running a great game requires different skills that creating a great adventure. Never feel like you're doing something wrong just because you didn't write everything that you use in your campaign."

- Then there's the "Don't Change Anything Else" section (p. 32), in which Raggi again reiterates his view on the value of using other people's modules: "The very advantage of using adventures written by others is defeated if you change every detail to more closely match your style. After you take away the elements that could harm your campaign and change the names and other such details to fit your campaign, leave the adventures alone. Run them in the spirit they were written." I struggle with this, liking to tinker with other folks' modules, but I absolutely agree with Raggi here in principle.

Next Referee tackles issues relating to "The Campaign," including:

- "As characters travel, more areas that began as mere concepts can be filled in and become true locations. Your world will grow organically" (p. 33). Hear, hear! This is exactly how world-creation should occur, IMO. For example, I didn't know jack shit about the Minochian town of Fortinbras prior to my current party's setting up home base there; we have co-created it through play. This is the essence of sandbox play and a superb strategy for older-school, lower-prep GM's.

- I am quite fond of the section on "NPCs" (pp. 45-46), and would particularly like to single out this sharp little tidbit for honorable mention: "Quick rule of thumb: Average NPCs that don't need a name unless a player asks just have average stats. The important NPCs get +3 in modifiers to spread around. [. . .] Next -step-down NPCs get +2 in modifiers, and more common 'lieutenant' personalities just get a +1."

- On page 46 I noted an in-text reference to the back cover NPC charts, which are GREAT:

A sample of LotFP Referee's awesome back-cover NPC table.
- A listing (with brief commentary) of some of the key OSR publishers (pp. 74-76), including Basic Fantasy RPG, Black Blade, Brave Halfling, Frog God, Goblinoid, OSRIC, and a few others. This is a smart thing to include, a nice resource for somebody (especially a Referee) just entering the OSR end of the hobby.

In sum, this is the best of the three LotFP WFRP books, IMO.  It is certainly the most "Raggian" of the three volumes, and I think that it poignantly reminds us that Raggi is particularly insightful when it comes to effective techniques to use behind the screen.**  Not to diminish the Grindhouse game itself, but Referee is where its author really shines and I could easily see this book being sold as a stand-alone volume, perhaps in a slightly abridged version re-titled James Raggi's Essential Referee's Handbook.   I doubt Mr. Raggi has any interest in such a project, though, so for now I must simply recommend that you BUY GRINDHOUSE in order to acquire this book -- and the elegant, extremely well-produced game system to which it belongs.

--
*Raggi even says of himself on p. 2 of Referee that "I am a far better writer than I am a Referee, for sure" -- an interesting comment, to which I return when I talk about my experience of Raggi-as-Referee in the other footnote to this review.
** I can vouch for this firsthand, having played in one of the online playtest groups for "A Stranger Storm," the adventure included in Referee.  Raggi is an absolute delight as a DM, and is especially good at acting out the roles of the NPCs.