The session began exactly where the previous one left off, in the chamber containing Morag's Gate. After discussing the possibility of using one of their other bone chits to reactivate the Gate, and despite Dak's professed willingness to be talked into enacting just such a scheme, the party ultimately rejected the notion of using the Gate again, and after spreading some dirt around on the floor surrounding the Gate, they withdrew from the Gate chamber and closed the huge iron door behind them. 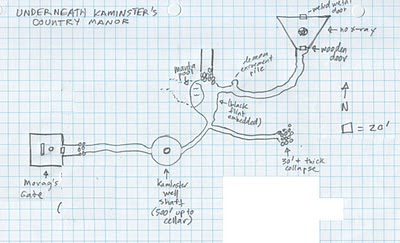 Note the scale: 20' per square!
They returned east to the large circular chamber directly underneath the 500' vertical shaft coming down from the Kaminster Country Manor Secret Cellar. They then pressed on to the east exit from said chamber, heading off northeast along another natural tunnel. This one led to a natural grotto chamber with a pool on the west side. A pungent odor which smelled like combination of feces and sulfur wafted through this area, but did not originate from the pool. The pool was quite muddy and hard to see through -- even with Vivuli's x-ray vision ring!

The bulk of the north wall of the pool chamber consisted of a huge rubble pile -- as if that section of the chamber had at one time collapsed. Dak and Innominus immediately set about searching the rubble pile, while Vivuli checked out the pool and Yor searched the chamber's east wall.

Dak learned that the rubble collapse did indeed cover a prior section of corridor that lay beyond. Meanwhile, Innominus found a skeletal arm sticking out of one portion of the collapse, a leather scroll case still clutched in its bony hand.

Innominus touched the scroll case and instantly had a vision of himself kneeling in a temple, before a towering altar whose pinnacle was made to look like the sun, and verily it glowed as if it were the sun even though it was inside a temple. Also before him in the vision was a glowing sword, point-down, which he grasped as he knelt before the altar. The vision passed; Innominus let go of the scroll case and, saying a prayer to Endra, began excavating the skeleton from the rubble collapse, with Dak assisting.

Meanwhile, searching the pool chamber's east wall, Yor found a shard of night-black metal embedded in the stone of the wall, at about 5' height. This is the same substance of which is constructed the night-black mace the party found at the very end of Session 41 [though not yet mentioned in that session report].

Inspecting the muddy pool more closely, Vivuli was able to detect a few large, manta-ray like creatures lurking around the bottom, hovering over what appeared to be treasure: he glimpsed a chalice of white gold.

Once Innominus and Dak finished excavating the skeletal remains of the presumed Sword-Cleric,* the whole party got interested in Vivuli's manta ray pool. Yor chucked a medium-sized rock into its center; the rays momentarily scattered, regrouping in the furthest removed corner of the pool. This suited the party fine; they prepared grappling hooks and ropes and prepared to drag the various items of loot out of the pool one by one.

Innominus took a fancy to hook some of the dead flesh of one of the slain vulture-demons from last session onto a grappling hook and dangle it into the manta ray pool, presumably as some kind of bait. But the vile, sulfurous stuff repelled the rays, and they retreated even further back into the pool, so far back that most of the party (save Viv with his x-ray vision) couldn't see them anymore.

The party then chucked the whole demon carcass into the pool, to keep the mantas at bay while they looted the treasure. They got:


And now back to Carter!]

They stashed the loot in their portable hole and headed down the natural passageway to the east. The stench of sulfurous feces became much stronger as they went east, and indeed, they soon came to a niche in the north side of the passage that apparently had served as the demons' crapper. There was a huge pile of blackish excrement there. For now, they passed it by, and followed the natural passage as it bent around ninety degrees to the north, terminating in a stout, wooden door. Vivuli's inspection revealed that the door was locked, and his x-ray vision showed him part of a large chamber beyond the door.

Viv attempted to pick the lock, to no avail, and furthermore, upon touching the door, a voice inside his mind boomed: "Get away from there, puny scumbucket!"

Yor then applied his +1 crowbar to the task, and, rolling a "19" for his "attack" roll vs. the door, he busted that sumbitch open. The party now beheld an unusual sight.

They looked into a large triangular chamber, with a huge (25' tall) statue dominating the space. The statue depicted a grotesque, vaguely humanoid yet betentacled creature, apparently with no eyes. It was like nothing the party had ever seen before.

The party spread out into the chamber, searching for traps and the like. Once they got round to the north side of the chamber, on the far side of the disturbing statue, they saw a metal door with no handles, centered in the long north wall. Viv noticed right away that his x-ray vision could not penetrate the walls of the triangular chamber, nor the northern metal door.

Dak approached the statue's base and inspected it. The statue was carved out of the living rock of the chamber, as if it was simply left here when the chamber itself was excavated. The workmanship was extraordinarily precise, if strangely artless. Dak also noticed some dried substance caked on the surface of part of the bottom of the statue; he scraped off a sample of some of the dried, greenish substance and stashed it away in his belongings.

Feeling nervous about Dak's probings of the unnerving statue, Viv retreated from the triangular chamber, returning to the excrement pile niche to (in his words) "x-ray demon poo."

Meanwhile, always the daredevil, Dak took out his new steel hand axe and poked it into the base of the statue. Surprisingly, the blade sunk into the statue's surface, penetrating about two or three inches in . . . until a voice boomed inside Dak's mind:

"HOW DARE YOU SACRILEGE??"

and the dwarf was suddenly blasted back twenty feet by a terrific blast of greenish electrical energy, injured from both the blast and his having been unceremoniously hurled to the hard stone floor. Though he wondered about it, Dak ultimately could not tell if the telepathic message had originated with the statue itself or was delivered from somewhere (or someone) else nearby. The PCs decided not to wait around to find out; they exited the triangular chamber the way they had come, shut the wooden door behind them, and joined Viv at the demon crap-pile. Sadly for the industrious assassin/mu, there was nothing to be found there.

The group briefly explored one other eastbound passage leading off the manta pool chamber, which led to a large cave-in about 30' down. Viv scanned the collapse with his x-ray powers, and saw that the rubble went back at least 30' deep. He also saw a (somewhat pulverized) Noffellian holy symbol about 9' deep under the rubble.

--
* EDIT: After the excavation, Innominus finally did get a look at the scroll inside the skeletal Sword-Cleric's scroll case. It was an extremely potent scroll of divine magic, which Innominus sensed must be an anti-curse or curse-virus spell of some sort. The cleric of Endra also strongly suspected that the scroll was only usable once.