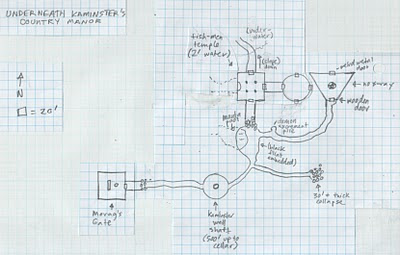 Note the scale: 20' per square!
After briefly checking out the large rubble pile at the end of the southeasterly passage off the manta ray pool chamber, the PCs decided to get the hell out of the tunnels for awhile. They headed back up the shaft to the Prince's Manor, to get some rest, pray, re-memorize spells, and so on. As they ascended, they posted Royal Guards in the Manor's cellar at the trapdoor covering the 500' shaft.

Before retiring for rest, Innominus and Yor had a brief discussion with Grand Vizier Krock, the recuperating Prince's principal adviser, about current affairs at the Country Manor. Krock mentioned Father Azamondius, the high-ranking Priest of Carcoon currently en route to the Manor all the way from the Free City of Kaladar, over a week's travel to the north.

YOR: Let's bring him down here, feed him to the manta rays if he messes with us!

KROCK: I am not suggesting that you become combative with the invited Priest, I am merely suggesting that IF the Temple of Endra would like to become even more closely held in the Prince's good graces. . .

INNOMINUS: But I have already intervened with Endra on the Price's behalf, saving his life! Is that not enough?

KROCK: Of course, we deeply appreciate what you have done, and you and your compatriots will always be welcome at the Prince's court. However, Father Azamondius of Kaladar is on his way, and as a high-ranking Holy Man in the region, he has a vested interest in associating his Temple with the Prince's reputation and power. It is a political consideration for him, and a matter of standing and rank. So if you wish to establish the clear presence of your Temple in the Prince's court, especially in the face of Azamondius, I suggest you contact your Temple elders and have them dispatch a higher-ranking Priest of Endra here forthwith. This is meant as no insult to your own holy gifts or standing among us personally, but merely as advice to you as the political situation around the Prince solidifies.

Despite his exasperation with such shallow political maneuverings, Innominus did ultimately follow Krock's advice and send word to the Temple of Endra in Kaladar, apprising them of the situation and suggesting they send a name-level priest to southern Minoch ASAP.

No sooner had the cleric dispatched the outbound messenger to Kaladar than an inbound runner arrived at the front door, bringing a leather parchment tube containing pages intended for Innominus, Priest of Endra. The documents were sent by Sister Fenway, Priestess of the Church of Achelon, Holtboro Diocese.

The parchments inside were three:

- a letter from Sister Fenway explaining that she and her collaborators had tracked the symbols on the necromantic coins to an old document of evil runes from their archives, a copy of which was enclosed; and that she had also provided a map to locales in northern Achelon where necromantic coins had been found

- a non-magical diagram of a set of magical symbols, a great majority of which appeared on the powerful anti-curse spell scroll Innominus found in the scroll case far beneath the manor earlier that day (see footnoted EDIT in Part 1)

- a map, showing Enhelm, Holtboro, and the graveyard where the PCs met the entranced locals and first found necromantic coins; the map also showed five other sites with coin icons, and, at the far west side of the map, across a swamp from the six coin sites, a castle icon with a sinister "death" rune inscribed above it

Yor and Innominus asked the inbound messenger if he'd seen Father Azamondius' entourage approaching or entering Fortinbras. He replied no, that the heavy snows of the day had slowed much road traffic south, and that furthermore, there were dark rumors surrounding conditions in Farn Junction. In fact, he said, the word on the road was to avoid the northern Minochian city at all costs. He did not know precisely why; yet he himself had chosen to circumvent Farn Junction on his way south from Kaladar.

YOR (to VIZIER KROCK): I suggest you send a few of your men as scouts to Farn Junction, to see what is actually happening there.

KROCK: You are so right, good master Dwarf! I shall do as you suggest forthwith.

The messenger then left, the PCs were given rooms in the upstairs west wing of the Manor House, and they retired for the night.

Next morning, the dawning of Day 150 of the party's Arandish adventures, saw them rise early, send word to their dwarven housemen in town to hasten to the Manor House bearing mining equipment, and then they set off back down the 500' shaft to the underground dungeon far below.

Once down, they immediately headed to the northern end of the manta ray pool room, and started excavating that cave-in in order to reach the northbound passage beyond. One hour of excavation gained them a small but safe passage through the rubble pile to the other side. On that side was a stone passageway with seaweed motifs etched into the walls. Down that passage about 40' was a stone door with strange symbols etched in it: what looked like a continuation of the seaweed motif, and a thing vaguely like a fish's head.

First, the PCs ordered their dwarven mining accomplices to head back to the 30' deep cave-in at the end of the southeastern passage off the manta ray pool room, and to start excavating that collapse. Then Viv and Yor readied weapons, Innomius prepared to detect evil, and Dak, new steel hand axe held on high, braced himself to fling open the "fishy" door.

As soon as he touched the door, Dak felt a strong strong, sweet feeling of adulation toward the fish-head symbol etched on the door-face; but he was able to mentally resist this urge, and he cleared his mind and threw open the portal.

Within was a large, square pool chamber dominated by four thick central pillars and a great altar and fish-thing statue dominating the western side of the room. The entire place was a 2' deep pool of water.

Innominus' ability to detect evil revealed that the central pillars and the altar / statue all radiated very strong evil indeed.  Viv began examining the two other doors out of the place -- also etched with the seaweed-and-fish-thing design -- with his x-ray vision, and saw some of the spaces beyond: to the east, a passageway leading down to a circular chamber, and to the north, a passage that sloped down to a waterline and continued sloping down (and bending west) fully submerged underwater.

Then Viv turned his x-ray attention to the fish-thing altar, and noticed that the 2' deep pool was actually much deeper right beneath the altar, and in fact seemed to extend into an underwater passage behind the altar itself.   No sooner did he notice this interesting feature than there was some underwater commotion from that quarter, and the PCs became aware that something was swimming through the water at lightning speed from beneath the altar, into the room! 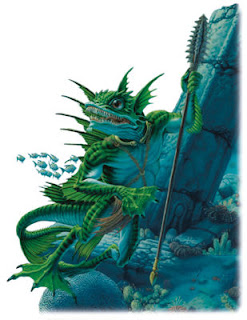 Innominus quickly cast Prayer as the various PCs were attacked from the water by a group of hideous fish-men.  There were seven of the swimmers altogether, but in the first round of fighting, Viv cast sleep and knocked one out cold, then Innominus held three more.  With those four down, the party had little trouble hacking one more to death before the remaining two swam swiftly back the way they had come, under the altar and out of sight.

With that, the party decided to (at least temporarily) vacate the fish-men's temple, and withdrew from the room, though Dak was sure to prop the door open so he would not have to touch it again in order to gain entrance to the place.  Also, Innominus pissed in the fish-men's pool.

As the cleric exited, he cast detect magic, and thereby learned that the pillars, altar, and door etchings of the fish-head all radiated strong magic (as well as evil).

Just outside the underground fish-man temple, on the morning of Day 150 of the party's Arandish adventures, the session ended.

DM's Notes
Fun session --  a lot happened!  And much of what did happen was good, old-fashioned dungeoneering activities: lots of searching, exploring, sifting through rubble, carefully excavating rubble piles, and (right at the end) a little bit of melee combat.  I like this kind of stuff.

I also like the previous plot intrigues that are finding their way back into play --  I find the information delivered from Sister Fenway of Achelon to be portentious.  We will see, of course, what the players choose to make of it.

Lastly, two PCs leveled up at the end of this session: Dak leveled to Dwarf-6, and Vivuli leveled to MU-4.