Ein Spawn of Endra quantifies it:

Like Carter, I also could not resist the sirens' song that is the Chessex Pound-O-Dice. I've got my favorite sets of dice for my own gaming purposes, and unlike Carter I'm not trying to run a public game, but this was not purely commodity fetishism on my part. Last week I was messing around with Zak's Quickie Small Castle/Fort Generator and since I was lacking in d6s, I had to mix in d12s, things went pear-shaped ... but that's another post. For those sorts of things I need more dice. Perhaps a Pound-O-Dice would suffice. Ah that reminds me of the extemporaneous lyrics to I Worship Satan:


I'd like to sacrifice some rice. Now wouldn't that be nice? Build a sacrificial altar on the Rock of Gibraltar. And I didn't even falter.

Anyhoo, here's the teaming horde I got for what you spend on a 6-pack in Pennsylvania: 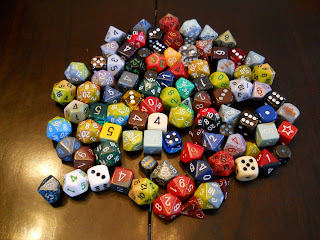 There's some pretty cool dice in this set. Maybe I like colors that are not market-viable. Well, sucks to be you, Everybody Else That Hates These Colors! Why don't you buy another set $10 set of 7 beautiful dice to drown your sorrows in already? Having said that, I wasn't stoked on the (promised to be speckled) coherent set of dice included: 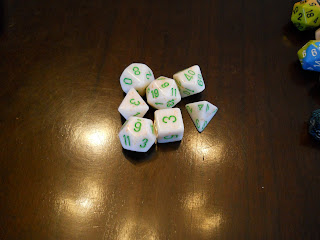 These are cooler than they look here -- the white groundmass is flecked with orange -- but you think they should glow in the dark and they don't. You're never really gonna love dice that should do something and they just don't do it. Seriously. But what the fuck, they cost me about $1.50 total. And I miss using the beautiful geological term groundmass.


But, heedful of a comment from the inestimable Kelvin Green, I broke this down a bit. Here are the dice sorted by shape (note the coffee mug/wine glass axis implied at the top of the image): 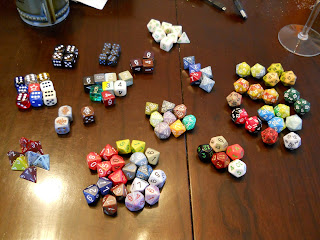 So yes, we're a bit light on the d4s, d8s, and d12s. And the dice aren't totally random, there are matches within types (though much less so between them). What I got: 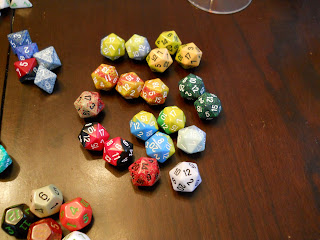 So help. I've got two of these d6s and another with the same symbol. What is that? A dragon or wolf head? What game does this belong to? Rotate this thing around, I can't make any sense of it. 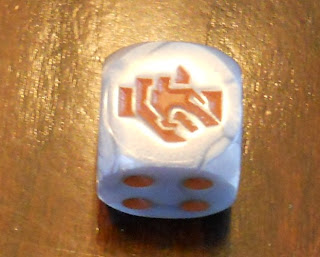 As I sifted through these dice and latched on to the colors that I liked the most I became more pleased with some of them. Then I saw how my favorite dice were congruent with one of my favorite albums, Stereolab's Dots and Loops. 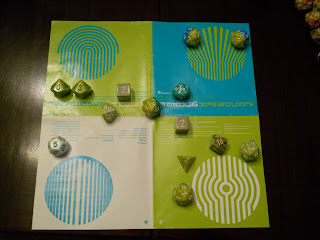 At any rate, cheap thrills from the Pound-O-Dice.