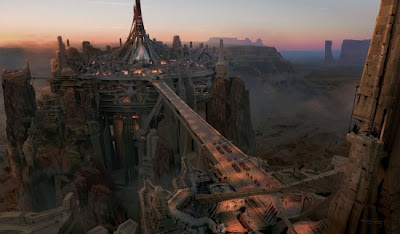 The City of Helium

I saw the new John Carter movie on Wednesday, and I really liked it.  While acknowledging that it ain't Shakespeare, I nevertheless enjoyed it thoroughly.  It was great fun to see Barsoom brought to vivid life, and I would single out the film's depiction of the Tharks, its portrayal Carter's faithful "hound" Woola, and its casting of Lynn Collins as Dejah Thoris as particular high points.  The airships were killer too.  I wasn't totally sold on Taylor Kitsch as John Carter at first -- I agree with Al that he could have been characterized as more of a "chivalrous gentleman," as in the ERB books -- but he grew on me over the course of the movie.

As you may know, there has been a ton of press circulating about how the film is a colossal box-office flop, sunk due to the studio's overindulgence of director Andrew Stanton and a seriously botched marketing campaign.  That all makes fascinating reading, and I am especially interested in (and, having seen the film, frustrated by) Disney's last-minute decision to change the film's title from the appropriately evocative John Carter of Mars to the blandly obtuse John Carter.  This was a big blunder that, if corrected, may not have widened the actual audience for the film by a great margin, but as it stood surely didn't help the film's chances to accrue the following it deserves.

Much of the press about John Carter zeroes in only upon the tumultuous production and distribution circumstances that brought the film to the screen.  Yet as a loyal Edgar Rice Burroughs fan who knew I wanted to see John Carter even if it was flawed in certain ways, I am more interested in the movie that actually made it to the screen.  I want to judge the film on its own merits.

On that score, John Carter is a total success.  It is an engaging, thoughtfully crafted and very well made science-fantasy action epic.  I would even say that it is the superior, entertainment-value-wise, of many recent superhero films including Thor and Iron Man 2.  I personally had much more fun watching John Carter than I have practically any other big-budget movie since the first Iron Man.

For a really smart video review of the film itself, check out the Red Letter Media "Half in the Bag" Review, which begins at the 11:03 mark in the linked episode.

At around the 13:44 mark in that review, Jay (the light-haired guy on the right) calls John Carter a "1980's throwback," and that assessment may account for much of its appeal to me. I am forty years old, and my movie tastes are starting to become increasingly "old-fashioned" I think. I really enjoyed John Carter's fun spirit and straightforward, comprehensible action sequences. In fact, the editing of the action sequences in John Carter works for me in ways that the action-sequence cutting seen in Christopher Nolan's Batman films or Michael Bay's Transformers films does not. I find much of the action portions of those movies to be literally baffling; I cannot tell what the hell is going on from shot to shot. In addition to its general fidelity to source material I care about, John Carter moves more at my pace, editing-wise, and I like that.

To pick a couple of nits, I would say that John Carter's flashbacks to Carter's dead wife (??!) were totally unnecessary and did nothing for the story being told. The dialogue was a bit clunky and stilted at points, though no worse than what we get in most big-budget action films (this is where Nolan's work leaps ahead of the competition). I also wasn't totally keen on the role the shape-shifting Therns played in the narrative -- I agree with Oliver Lyttelton's point #6, which states that: "For all the many antagonists thrown at him in the first 90 minutes, John Carter finds out in the last third of the movie, it’s actually Matai Shang (played by Mark Strong) who's the villain. Pulling the strings behind Sab Than’s quest for power, he spends most of the movie keeping an eye on John Carter before they finally meet head to head late in the game, although he doesn't simply kill Carter, because he's a cliched movie bad guy." The Therns indeed seemed bad just for badness' sake, and I would have liked to see more actual development of the Sab Than character and a greater emphasis on the substance of the rivalry between John Carter and Sab Than.

In conclusion, I must admit that director Stanton's attention to the details of the original Burroughs concepts may alienate or confuse many viewers not already familiar with John Carter from ERB's books (Lyttelton makes this his point #4). Yet I also can't see how any moderately intelligent viewer wouldn't figure out what a"Jeddak" was once it is used three or four times in the course of the dialogue (which it is in rapid succession at the film's outset).  Come on, folks, how much spoon-feeding is necessary?  I admire Stanton for sticking to his guns and keeping Barsoomian language more or less intact -- it gives this movie flavor and uniqueness.

Jay of Red Letter Media captures this spirit when he remarks (starting around the 18:18 mark) that "I see this movie having the same fate as other big-budget movies that don't find an audience in the theater, like Tron or David Lynch's Dune, it finds its audience later, becomes more of a cult movie."  This sounds right to me. I think John Carter -- which thankfully retains its full original title, John Carter of Mars, in the title card right at the end of the movie -- will age well, and will be regarded more highly once the hubbub over its big budget and small theatrical returns have died down.  I plan to see this film again when it releases to DVD, and I know that I will be an avid member of the cult of John Carter of Mars.

Lynn Collins says: "Come see me as Dejah Thoris in John Carter -- I'm so good I practically steal the movie!"