This has been a long time coming, but here, at long last, is my review of Oubliette Magazine Issues #6 and #7.

I am a big supporter of Oubliette and have written largely positive reviews of the magazine and its content in the past -- see my review of Issues #1-4 and review of Issue #5.  In the latter review I stated that "Oubliette is a model for concise, user-friendly fanzine presentation" and I still feel that way. 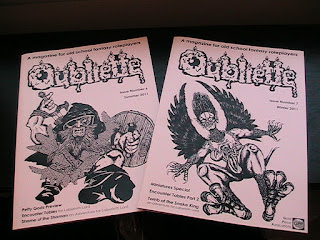 Oubliette has the advantage of springing from the pen of a relatively small group of contributors, mainly Peter Regan (the magazine's Editor) and his wife and chief illustrator, The Marg. The small size of the Oubliette team -- everything in Issues #6 and #7 is generated by Peter R. and The Marg EXCEPT the "Petty Gods Preview" in Issue #6 -- leads the 'zine to possess a remarkable consistency of feel and quality. Every issue delivers good, gameable, Labyrinth Lord-compatible stuff, an a format I have come to feel familiar with. I like that. Not only am I in favor of the "look" of Oubliette in general -- unpretentious, well-organized, easy to use at the gaming table -- its consistency gives its content a kind of "brand recognition" that (IMO) breeds reader loyalty. I look forward to certain features -- the adventure scenarios, "Monster Club," Regan's short but inspirational editorials, The Marg's artwork -- every time. And Regan and Co. do a great job of continuing certain threads and themes across multiple issues, as in the MonsterMark-inspired Encounter Tables offered in these two issues under review.

So what's in these Issues?

Regular features in Oubliette #6 include two Monster Club entries, one of which details a Skeleton Lord, the second being a series of three Random Encounter Tables (for Dungeon Levels 1-3) based upon the MonsterMark system presented in Oubliette #5.  As a person who is marginally interested in balancing monster capabilities and party strength, yet who is unwilling to do even the minimal amount of math required to use MonsterMark properly, I am thrilled to have some preformed Encounter Tables placed at my disposal.  At the very least, I can cherry pick these tables for monsters of certain power levels.  MonsterMark-based encounter tables for Dungeon Levels 4-6 are included in Oubliette #7.

Another consistency producing feature included in issue #6 is the introduction to the Newland Campaign Setting, which is presented "to provide a backdrop to the next few adventures that will be published in Oubliette" (p. 8).  Now I do not myself strictly need a campaign setting; but as with so much of what comes out in Oubliette, Regan does a fine job here of keeping things brief and modular, so that bits and bobs from the setting could be easily borrowed or ported into other scenarios and campaigns.  What we get this time around is a short (less than one page) history of the Newland setting, a small map, two pages of bullet-pointed location notes, and one page of character generation guidelines for rolling up Newland Campaign PCs.  That's it!  But it is enough to get one started and to convey the basic flavor of the game-world.

Most importantly -- and this is one of the great strengths of Oubliette overall -- the Newland setting and its parameters have clearly emerged out of Regan's home group's game play: as he states at one point in the explanatory text, "Detail [. . .] is purposefully kept brief so that it can be developed through play" and "as a group, [my players and I] wanted the new campaign to use the Labyrinth Lord Advanced Edition Companion so all the adventures in this series may include AEC content" (p. 8).  In other words, Regan writes this stuff because he is literally playing it in his home campaign.  As James Maliszewski has written, this is the absolute best way for gameable material to emerge, and I commend Regan for honoring this Old-School process and for sharing the fruits of his labor with the Oubliette-reading public.

Other features in this number include Shame of the Shaman, the first Newland-based Adventure; a feature on "Whips in Labyrinth Lord," which I like very much; a writeup of a Raven Familiar; and one of my perennial favorite columns, "What's In The Oubliette?" wherein a wide array of FRPG-related products and programs are reviewed.

Monster Club #11 presents a fiendish trap that I like a great deal; I generally appreciate the wide berth Regan gives himself in creating stuff for this regular column.  Monsters, monster-related traps, new takes on old monsters, undead conversion rules, MonsterMark -- hell, a collected omnibus of Monster Club features alone would see heavy use at my gaming table.  Another equally practical and informative feature in this issue is the one-page commentary about the history and uses of the Ten Foot Pole, an insightful piece I hope might set a precedent -- maybe a "dungeoneering equipment series" is in order?

One of the most noteworthy components of Oubliette #7 is its interview with Richard Scott of Otherworld Miniatures.  As I have noted before, I do not collect, paint, or use miniatures, and never have; yet I LOVE reading interviews with industry insiders, even in areas of the hobby not directly pertinent to me.  I like hearing about what inspires creative people, and it is fun to hear about the inner workings of the business side of our hobby.  I only hope that Oubliette interviews more game creators and industry figures in the future.

The middle part of Oubliette #7 integrates three different features in order to present more background on the Newland Campaign Setting: there is Part II of the Newland writeup itself, Monster Club #13: Newland Bestiary Part I (the "Tree Demon" is a standout), and the next adventure in the Newland series, Tomb of the Snake King, which also includes three new monsters!  Particularly when we consider that all this is the work of one writer, the sheer amount of game-ready content one gets in each issue of Oubliette is most impressive.

I haven't mentioned the ongoing fiction work, The Song of Sithakk, nor the three regular comics featured in Oubliette, Mouse Watch, Tales from Hell, and Goblin Quest, largely because I do not typically read them. I am sorry to confess this, yet to be fair, I almost never read the comics or fiction in Dragon Magazine all those years either.  I am very glad they exist; I think gaming magazines should include fantasy fiction and comics, even if I am an undeserving ingrate who does not appreciate them.

That said, I do pay attention to the artwork, so let me single out a few favorite pieces from these two issues. First there is the dwarf on the cover of Issue #6, which is quite literally one of my all-time favorite illustrations by The Marg.  That eyepatch is a sweet touch, and there is just something about that guy . . . his beard is just great, the look on his face says it all about his intentions, and I like that he is just reaching to draw his sword.  Hell, the fact that he uses a sword (rather than the more "typical" dwarven axe or hammer) is a breath of fresh air.  Great pic!

Other standout illos in Issue #6 include both images on p. 4 (but especially the cleric and cityscape on the bottom of the page), the ruined temple on p. 15, the wonderfully captioned piece on p. 22, and the raven pecking out the skull's eye on p. 30.  And even though I haven't (yet) read the fiction, the picture of the arrow-ridden horseman accompanying Sithakk on p. 38 is another standout.

The harpy on the cover of Issue #7 freaks me out; I can't say that I "like" it in the usual sense of that word, but it is a very effective drawing because it scares me a little, especially those hind claws.  Creepy!  I also very much like the noir-ish illustrations accompanying the Tomb of the Snake King adventure (pp. 18-23) and the superb toad on p. 27.  Kudos to The Marg!

So what, if anything, is wrong with Oubliette?  What are its limitations?  Well, its biggest limitation is also its greatest strength, which is that it is primarily aimed at the "vanilla" player of Labyrinth Lord and similar old-school high fantasy role playing games.  That happens to be my demographic, which is why I love this fanzine so much; but players of darker, more swords-and-sorcery type campaigns or fans of whacked-out, "gonzo" type materials will not find as much to use here as I do.  So far anyway, Regan and Co. do not push very hard at the generic boundaries of Gygaxian D&D -- which is just fine with me.  But that could be considered a weakness to those who prefer stuff like Patrick Wetmore's (excellent but weird) Anomalous Subsurface Environment, for example.

But if you play more-or-less Gygaxian-style D&D, you really cannot go wrong with Oubliette.  The 'zine continues to deliver lots of usable game content in an appealing, usable format that is well worth the extremely reasonable cover price of $4.63 per print issue, or a mere $2.50 per pdf.

To paraphrase Regan himself from the opening editorial to Oubliette #6:

"I hope Oubliette fanzine leaves you entertained, informed -- inspired even -- and not too bogged down in number crunching."

Creativity and inspiration-value: 4 out of 5.  Not much boundary pushing going on here, but Oubliette is an ideal source of inspiration for those of us who stick to a fairly Gygaxian model of world-building and game play.  And The Marg's gritty illos should serve as inspiration to players across various fantasy RPG genres.

Use-value to Referees: Varies, depending upon the type of campaign you are running. High Fantasy = 5 out of 5.  Pulp fantasy = 3 out of 5. Weird fantasy, post-apocalyptic, or sci-fi = 2 out of 5 at best. Oubliette is ostensibly geared toward the Labyrinth Lord ruleset, though its content would be easily adaptable to other similar systems.