I have been falling rather behind on my campaign play reports.  My Skype-based "Arandish Campaign" group, whose Session 49 report posted yesterday, just played their Session 53 a few nights ago!  So my reports are lagging four sessions behind at this point for that group.

My Brockport-based Lost City group has played four sessions, which brought them to the gates of the Underground City. However, following that fourth session about a month back, I declared a temporary hiatus from that campaign until the end of my current academic semester in early May.  My work schedule right now is just too intense for me to successfully referee two different campaigns simultaneously; I will be able to shoulder that responsibility come summertime.  The Brockport group will resume its adventures then, once my schedule lightens up a little.

Meanwhile, Cid, one of the players in my Brockport Campaign, has introduced me to the FudgeRPG system by starting up a game of Diaspora.  Not only am I thrilled to have the chance to be a player in an RPG campaign, which really is a necessary relief for those of us who referee a lot, I am doubly excited to be playing in a hard sci-fi type campaign setting using the Fudge system.

Science fiction-wise, I have a long history with Traveller, have played West End's Star Wars RPG before and even played Shadowrun for awhile in college.  But I have rarely participated in an ongoing hard-sci-fi RPG campaign.  Luckily, Cid is a great referee, and he is doing a great job walking me and three other players through the intricacies of the Fudge system, which I am coming to appreciate and rather enjoy.

In fact, so taken have I become with basic mechanics of FudgeRPG that I ordered my own set of those cool Fudge dice, pictured here: 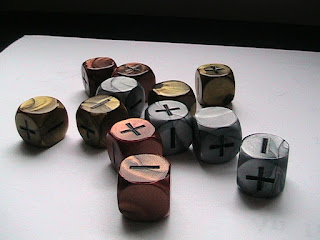 I love the simplicity of the Fudge system, the way it kind of sidesteps/minimizes the number crunching aspect yet still allows for exciting (and very easily comprehensible) die rolls. I like its unique take on die-rolling mechanics -- easily emulated with standard six-siders, but more fun with the real thing -- and I am becoming curious about how I might find more uses for these dice.

Are there any Fudge-system aficionados out there who would like to comment about the system, point me toward resources/blogs, and/or share experiences?  Anybody found any cool uses for these interesting dice in the old-school D&D context?

Anyway, those are my updates. 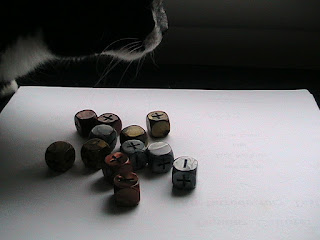