The group began the session in the early evening of Day 169 of their Arandish adventures, having just killed three phase tigers and captured a fourth on the mountainous slopes above the Frigglestone Brothers' Mine, newly acquired by the party.

The party stashed their captured phase tiger in a cage deep in the mine, while Vivuli dragged one of the phase tiger corpses back to the mine compound for eventual vivisection. Meanwhile, Yor dispatched his dwarven assistant Darvey on a week-long mission to:

(a) stop by Prince Arkus' camp near Farn Junction to inform the Minochian Prince Regent that the party was here at Frigglestone Pass,

(b) retrieve Garvey from his farm near Fortinbras and bring him back to the mine,

(c) travel out into the mountains adjoining the Frigglestone Mine to wrangle up some new dwarven staff for its operations.

The party slept the night in the mine office, then descended into the mine on the morning of Day 170. Their intent was to seek and destroy the ghosts rumored to be haunting the place. 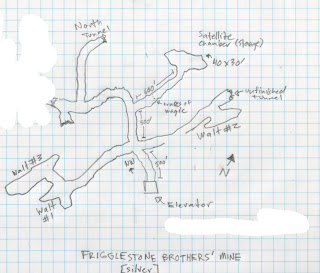 Vivuli cast conjure vermin, summoning a giant fire beetle to his aid. Viv sent his beetle ahead of the party into the north tunnel of the mine, where it was soon attacked by a ghostly being that looked vaguely like a dwarf! The beetle survived the ghost attack, though, and the ghostly dwarf-thing flew away, passing through a tunnel wall.  Viv then ordered the fire beetle to continue creeping northward, toward the North Tunnel.

Innominus searched the southwest areas of the mine -- Walt #1 and Walt #3 -- detecting magic all the while.  He found an apparently mundane scroll case tucked away in the north corner of Walt #3, cast detect evil, and got a negative reading with that as well.  He tucked the scroll case into his robe and led his compatriots northward, in the direction Viv's fire beetle had already headed.

At the terminus of the north tunnel, which was unfinished, Innominus' detect spells revealed yet another set of "Ghost Tribunal" pips -- 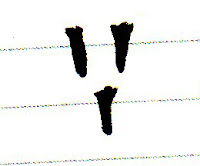 -- and that was all that could be found or divinely detected in the area.

The party decided to leave the mine and spend the rest of the day above ground, with a plan to return and camp that night in the mine tunnels, lying in wait for the return of the dwarf-ghost.  Vivuli instructed his fire beetle and rats to patrol the mine in their absence, and the PCs ascended.

That afternoon, Vivuli skinned one of the deceased phase tigers, and Yor took a few of the mine's current employees -- Ulek, Mulek, Ron Donald, and Jar-Jar -- down into the mine and set them to work excavating the latest silver lode (near Walt #2) with pickaxes.

The night of Day 170 of their Arandish adventures, the party descended the mine shaft and encamped near Walt #2. They were soon confronted by a dwarvish-looking ghost-creature, which swooped into the tunnel straight out of the tunnel wall and attacked Innominus with a ghostly axe.  It hit, and the Cleric of Endra instantly aged 40 years!

Yor then attacked the ghost, only to get counterattacked and unnaturally aged 10 years himself!

The party fled above-ground.  They spent the rest of the night making plans and resting.

The morning of Day 171 of their Arandish adventures, the party set off across the mountains to the northeast, heading off toward the mountain cave of Warren the Black, a wizard the PCs first met back in Session 36. Their hope was that the eccentric but knowledgable old arcanist might be able to help them develop a way to vanquish the deadly mine-ghosts. 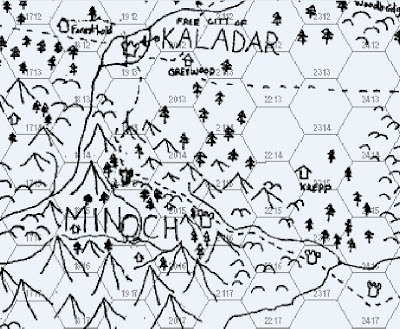 They traveled most of the day in peace, pulling the War Wagon along established yet treacherous mountain roads.  In the late afternoon, as they journeyed northward, they were suddenly ambushed by multiple squads of throghrin commandoes!  The vile quasi-undead hobgoblin-things shot crossbows and hurled oil flasks down upon the party, and Dak drove the wagon even faster, attempting to run the gauntlet.  The throghrin were relentless: the War Wagon's canopy was burned clean off by flaming oil, and poor Uncle Junkal was burned to death!  The party was eventually able to neutralize their throghrin assailants, largely due to Innominus casting hold person and rolling his nightly d30 -- a "30" -- to see how many beings were affected.