Every so often I pull some books off my shelf that relate to my early interest in the occult and the spiritual, and before I left Oregon I went back into a book I bought from a Mexican curanderia in downtown Fresno back in the summer of 1990, I believe. This is 777 and Other Qabalistic Writings of Aleister Crowley, a collection of facsimiles of Crowley's essays Gematria, 777, and Sepher Sephiroth, published by Weiser with an editorial commentary by Israel Regardie. These were originally published in (what would amount to a zine of the time?) Equinox, and some of Crowley's jabs at his contemporaries would fit perfectly into an OSR blog. To wit, I think I've read this exact passage from the preface of 777 in someone's Penultimate post:


Every new sect aggravates the situation. Especially the Americans, grossly and crapulously ignorant as they are of the rudiments of any human language, seize like mongrel curs upon the putrid bones of their decaying monkey-jabber, and gnaw and tear them with fierce growls and howls. (777: p.x).

["them", refers to words themselves. It's kabbalah.] At any rate, I can pick up on that thread later, but to the matter at hand: 777 contains page after page of tables of correspondence that connect the 10 sephiroth of the kabbalistic Tree of Life and the 22 paths between them, which are mapped on the 10 numbers and the 22 letters of the Hebrew alphabet, to all manner of mundane and occult phenomena. Too much to explain here, but if you're having a vision while traversing from Tiphereth to Netzach, you check against this giant concordance to see if it smelled and looked right for that particular path, or if you were being deceived by some entity or whatnot. Crowley was an empiricist. Here's a couple of pages. 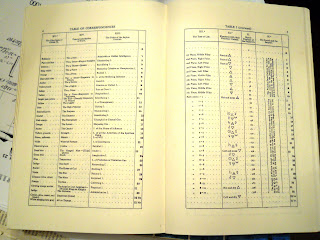 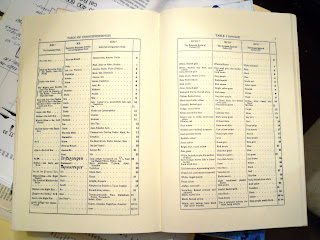 A few subtables struck me as being interesting random tables for D&D random road encounters, weird visions, or at least for inexplicable flavor. Here I've given the concordance for the 12 signs of the zodiac with the magical images of the angels of the decans ascendant, succedent and cadent as three d12 tables. The demons ruling these are another set of tables, but this will get you started. 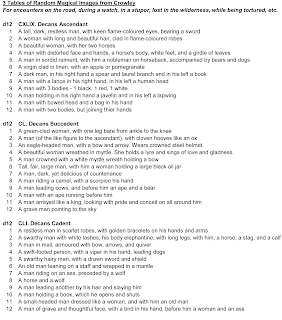 Crowley may have needed opium to make these tables work. Column XXLIV indicates that for the old school gamer, opium corresponds to rolling a d12. Enjoy!