For your consideration, the Spawn submits:

Recently Carter and I have been working on various maps, together and separately, and I've been trying to apply my skills with Illustrator to figure out how to help Carter make some existing maps functional for game tasks, like being able to add a hex grid to his awesome hand-drawn continental scale map. So maps and map generation have been on my mind lately. Oddly, with that and images like Telecanter's Black Pylon -- "a truncated pyramid of black basalt" -- in my head, I saw a little product code on an item while brushing my teeth one morning and tried to figure out what it was about. After doing some research I found it was a 2D barcode, this one using the Data Matrix symbology, e.g.:

This just encodes the letter "I". But as I tried to figure it out, I imagined a party coming up on an enigmatic structure with walls and columns of smooth black basalt out in the middle of nowhere, or maybe a group of these things. Possibly a ruin, but more likely a monument with all sorts of images and inscriptions on every surface. After a little bit of investigating they'd see that the layout is square, the west and south walls are complete, but the north and east walls are alternating pillars. And then what's inside may appear to be random ... but the regular pattern of the walls might suggest the arrangement within is somehow meaningful. Neat. (I also figure that there's actually enough space between pillars meeting at corners to slip through, or at least see through.)

So then I found this site that allows you to generate 2D (and other) barcodes out of whatever text you want (I suggest you set the module width to the max of 5mm for good resolution). So I started with the Data Matrix symbology and put in "Telecanter's Receding Rules": 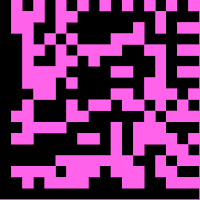 Some symbologies have other obligatory structures within them so scanners can orient the label. Some of these suggest towers, or something else. Here's "Castrate the Dwarf" in QR Code, where the black and white are inverted: 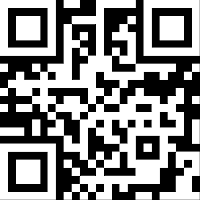 Maybe these squares are guard towers or shrines or tombs. But you (you meaning the Old School gamer trained in interpreting gridded top-down dungeon maps into the on-the-ground perspective) already start to imagine what these look like if you were exploring them, right?  When you see that little square in the southeast quadrant you want to know what's in there, or if you're the DM you want to put something in there.
The Aztec symbology puts a box in the middle. Here we have "Abandon Hope All Ye Who Enter Here", also inverted: 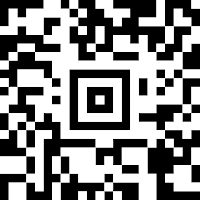 And last but not least, let's say you need some help getting together a hex-map for the Sea of O'SR project. Nothing perfect, but just something to get you going, and you want to have some enigmatic circular structure jutting up out of the sea. Well, take your usual UPS shipping label MaxiCode for "Adrift in the Sea of O'SR", change the colors and voila: 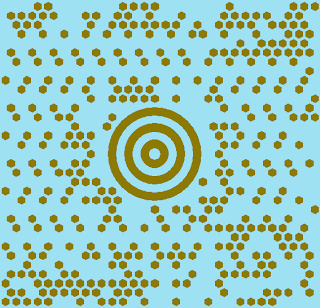 Maybe you cut out a bunch of the little 2-hex bits if you want. Or not. Raggi's Weird New World supplement has a lot of little islands in it. As does this MaxiCode of "Lamentations of the Flame Princess: Weird New World": 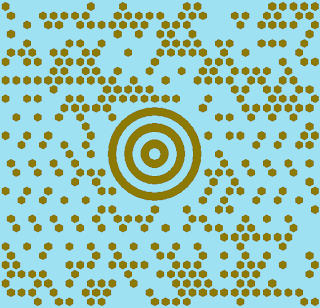 Or maybe you don't need a wilderness hex-grid, maybe it's a place like the Giant's Causeway in Antrim, Eire, with hexagonal pillars of columnar basalt because you're running a Led Zeppelin-themed campaign! AAAAAAGH! Too awesome! I'm losing my mind! (That's what the kid in the middle background is saying with his arms raised.) 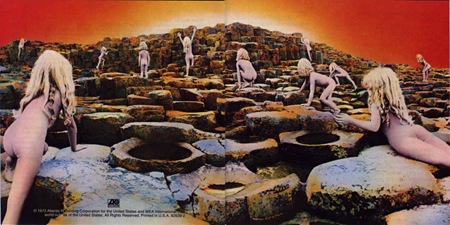 Now, you can't really manipulate these with vector graphics programs (my background), but photo editors like PhotoShop and GIMP can probably handle them pretty well (if the stuff that Telecanter does with public domain images in GIMP is any indication ... and by the way, next time you or someone you know talks shit about Fresno, remember it produced Telecanter. So shut yourselves up.) At any rate, there you go. An odd new way to get some graphical inspiration.
UPDATE: I later remember maybe another vague inspiration for this, the maps from Expedition to the Barrier Peaks, specifically this one I borrowed from a Brazilian Old School blog named Vorpal, on a post called (using my 2d6-Bard Read Languages skill) "Eight 'Easter Eggs' of D&D": 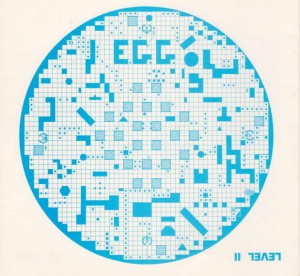 And you know what? Me and my sister saw that EGG way back in the day, and never realized it was about E. Gary Gygax. We just thought, "Ha! Egg! They put Egg in their map! Funny!" As I've said elsewhere, 5th graders are fucking stupid.