As Spawn of Endra has so elegantly outlined over his last two posts (here and here), our Arandish campaign experienced a minor crisis over the interaction between the Bard's Charm Monster skill and our d30 house rule. These two systems together produced a situation in which Uncle Junkal had a 70% chance to charm one up-to-ogre-sized creature per week at first level. This he did in Session 11, charming a rock troll, which has been with the party ever since. The presence of this regenerating rock troll has made it difficult for me as DM to kill, or even significantly damage, the PCs in most combat situations. That rock troll is just too damn powerful. Any monster I can send at the party that would be capable of taking out the rock troll (a red or black dragon would do the trick, for example) would likely overwhelm the PCs, catalyzing a TPK -- or would have until quite recently. In short, a rock troll is a bit too badassed for such low-level characters to be leading around.

I think I would feel better about the charmed rock troll situation if Uncle Junkal's player had had to pull off some incredibly improbable roll in order to charm the deadly creature, but instead he used his nightly d30 roll, which made it nigh impossible for him to fail. A completely legitimate move, but one that made me feel as though we had encountered a dangerous loophole created by the d30 house rule.

Obviously, by embracing a once-per-session d30 rolling rule in the first place, I am to some extent endorsing and encouraging (or at least tempting!) players to find unique applications of the d30 roll, and I should not be too shocked when game-changing results occur. But the rock troll feels like a limit case, a d30 exploit that has led to a long-term imbalance which in turn has deflated the stakes of a good many of the combat encounters the PCs get into. Call me a stodgy old DM, but I want combat to feel more dangerous and threatening for the PCs.

How to cure this unforeseen imbalance?

With Dyson Logos' 2d6 Thievery, of course! I am a big fan of Dyson's system, since I dislike d% skill mechanics in D&D to begin with. For me, 2d6 skill rolls just feel more appropriate to B/X / Labyrinth Lord than d% rolls do, so as soon as I saw Dyson's 2d6 Thievery article in Dyson's Dodecahedron Issue #1, I knew I would be adopting it into the Arandish Campaign.

It did not take long for me to realize that what works for thieves could easily work for bards. I started talking this idea over with Spawn of Endra, who additionally mentioned the cleric's "Turn Undead" mechanic, which also uses 2d6 to do what it does (see LL p. 8). Thus it would seem there is strong precedent for a 2d6 skill system embedded in certain aspects of LL / B/X.

Spawn of Endra then used his substantial statistical knowledge and graphing ability to create that bad-ass chart he posted yesterday -- I love it so much that I'm going to reprint it here: 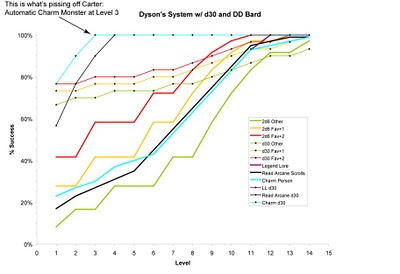 As you can see, 2d6 Bardery does indeed reduce the impact of the d30 rule, and generally follows a similar curve of success probabilities as d% Bardery. Admittedly, it makes using Bard skills a wee bit more difficult than under the d% system, but given how potent that Charm Person / Monster ability has turned out to be in the course of game play, I do not feel too badly about slightly decreasing Uncle Junkal's chances for success in his skill use in general. Furthermore, given Uncle Junkal's high CHA (15+, a Bard class requirement under the Brave Halfling template) he will always get at least a +1 to his Charm Person / Monster skill, as I use (and strongly endorse) the optional CHA Attribute bonus rule (see below). This attribute bonus factor is reflected in Spawn's chart. 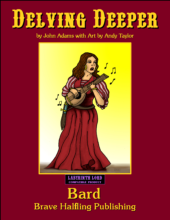 As I mentioned, we have been using Brave Halfling's Delving Deeper: Bard supplement as Uncle Junkal's basic Bard template, and for the most part I have been very happy with it. My favorite part is that it makes clear (as Spawn also discussed yesterday) that the Bard is not magical, an interpretation I favor. While his Charm Person/ Monster ability functions a lot like two certain spells, and while his Use Magic-User / Elf Scrolls ability allows him to fake his way into some quasi-arcanery, ultimately, the Bard is a non-magical class whose skills are mundane abilities, NOT spells.

[In a related note, Brave Halfling does the same thing for the Ranger in its Delving Deeper supplement on that class -- it takes away those pesky Druid spells and instead appends a mundane d% skill mechanic. I like this. Can 2d6 Rangery be far behind?]

So now Spawn of Endra and I proudly present 2d6 Bardery, hereby declared Open Gaming Content and available as a pdf here. You will probably need Brave Halfling's Delving Deeper: Bard to make best use of this system, but at the low low price of $0.75 for the pdf, this supplement is surely a must-have for those folks wishing to include Bards in their campaigns.  A free sample version is available here.


2d6 Bardery
Using the Brave Halfling Delving Deeper: Bard template as a baseline, we have established that Bards have three basic skills: Legend Lore, Charm Person / Monster, and Read Languages and Arcane Scrolls. The latter is a conflation of two Delving Deeper skills, the former of which (Read Languages) has no set parameters or roll associated with it in the Delving Deeper template.

Instead of using the d%-based skill chart in the Delving Deeper supplement, the Bard chooses one of the first two of those three skills (Legend Lore or Charm Person / Monster) to be his or her Favored Skill; the remaining two (ALWAYS including Read Languages and Arcane Scrolls) function as Other Skills on the table below.

Note that a roll of "2" always fails.

Optionally (and strongly recommended), you can grant a Bard his or her CHA modifier (i.e., the absolute value of the Reaction Adjustment modifier, +1 for CHA 13-17, +2 for CHA 18) to Charm Person / Monster checks. No attribute (INT) modifiers are permitted for Legend Lore or Read Languages and Arcane Scrolls skill rolls: exposure to lore during his or her training is the basis for the Bard's being able to decipher languages or arcane scrolls.

Endnote: Although much of this 2d6 Bardery business has been inspired by the presence and deeds of the Arandish Campaign's resident rodian bard, Uncle Junkal, it should be mentioned that Uncle Junkal himself does not completely conform to the rules given above. 2d6 Bardery as presented here should be considered a "Basic Bard Template" applicable to most bards; however, Uncle Junkal himself is a juggling specialist, and as such has a couple of skills / abilities not outlined here. A future post, perhaps?