Wherein thoust Spawn talks about his real-life battles to the death with dangerous vermin!

(WARNING: There will be images of arachnids being killed! If this is not your cup of tea, don't proceed!)

Carter posted last week or so about watching IJ and the Crystal Skull and how fire-ants would be a cool encounter, and I commented to the effect that I get enough of fire-ants in the field, what do I want it in my D&D for? I'm doing my doctoral research in southern Belize and mostly live in a shack-like camp when I'm down there, and especially at the beginning of the season there are always nasty scorpions, tarantulas, and whatever else refusing to be evicted. Plus there's bat shit on everything, dessicated lizard mummies, termite wings ... yes it's BELIZE and I'm so lucky and all that, but folks, the tropics are just NASTY. To quote the Talking Heads, if this is paradise, I wish I had a lawnmower. 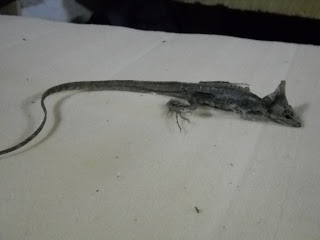 Our host thought this was funny. It's on the bunk next to mine. And yes, it truly is funny. But it's also NASTY. These are a sort of Jesus lizard and they get inside the place in the off-season and can't get out. They eventually starve and then mummify. Yay!

So off the bat, we get down there and we start running into, e.g. scorpions. 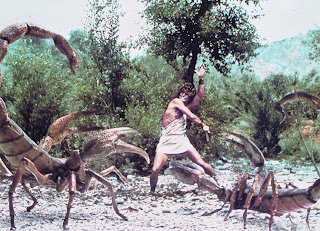 Maybe they're in the corner. Maybe they're crawling out of the fucking sink. Maybe they're in your boot. Maybe their nasty dull black exoskeletoned selves are curled up in a pile of your clothes and you see it while you're brushing your teeth in the morning half-awake as you select a shirt for the day. And you're in your underwear, barefoot, and moving something around in your mouth. It's already creepy, but you're being creeped out while pleasurably manipulating one of your orifices. You just got violated somehow. You can't undo that. So no, I don't want to kill it (I'm a Scorpio, JB!), but you can't cohabitate with these things. Are they going to kill you if you get stung? Probably not, but you will suffer, and be pretty ill. These are not Ray Harryhausen scorpions, but scorpions of any size are gnarly when they live where you sleep. Here's a little movie about how I found a scorpion in the lab one night and invited people to come down and help me kill it. Then there was a littler decoy one that threw us off:

Take home messages: 1) always assume the scorpion is alive; and 2) "Next time it's straight to kill kill kill".


Tarantulas. I have a lot of respect for spiders in general. My favorite spiders are the family of Jumping Spiders (the Salticidae! of course), who I consider to be good omens when I run into them. They are bad-ass little hunters. But they're little. They jump on your finger and they have no sense that they should bite you. They just see there's no prey so let's jump to the next place. They're like Stonehell kobolds (at least the ones we've met so far ... Stonehell 2: Kobold Boogaloo just announced notwithstanding). If you don't fuck with them, they won't fuck with you. 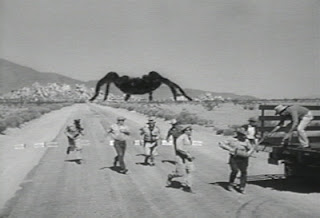 They are big enough to transgress the order of scale that just gets them in the range of human spatial reality. And then they're all furry and FAST! Scorpions are nasty and they move in uncanny ways, but tarantulas haul ass, as I learned in this episode from the next year (two parts, unfortunately):
When I was back down there in October I fought a splayed-hand-sized one to the death with a machete and a mop behind a plastic Chinese washing machine next to the bathroom at 1am. I ended up smearing it all over the veranda with the flat side of the machete ... black hairy scattered legs twitching and all the abdominal whatever spread like pale chunky peanut butter across the concrete. I was swearing through my revulsion at the whole scene. You don't sleep well after that. You also don't crap well after that since it happened on the way back from the bathroom. Again with the orifices.

And by the next morning a column of army ants were already hauling the fragmented tarantula carcass away to feed their young. Gygaxian dungeon ecology, anyone?


Next time: Reptiles! And I'll stat up a new kind of snake for your dungeon/wilderness enjoyment: The Black-Tailed Viper!