Review: No Dignity In Death 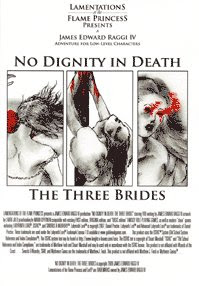 I recently bought a few James Raggi IV products I hadn't gotten around to buying previously: No Dignity in Death - The Three Brides, People of Pembrooktonshire, and Hammers of the God.  I am a big fan of Raggi's writing style and his unique, horror-and-heavy-metal-influenced perspective on our beloved RPG'ing hobby.  So I always enjoy reading his works for inspiration even if I am sometimes at a bit of a loss for how exactly to fit some of them into my own Lands of Ara campaign.

But reading No Dignity In Death was a particular treat for me, so I felt inspired to review it here.  Note that I have NOT run the module yet in a play situation, so this review is based upon a read-through only.  Also note that there will not be any spoilers in this review, both out of deference to readers who plan to DM or play it and because I am so taken with No Dignity In Death that I hope to run (at least parts of) it in my own campaign one day.

As its subtitle (The Three Brides) suggests, No Dignity In Death consists of three parts, each of which may be run separately from the others.  In his introduction to the module, Raggi reveals that this is how the three sections came to be -- as separate, unconnected adventures he ran in his home campaign.  I like that he provides a thumbnail sketch of a strange, isolated mountain town -- Pembrooktonshire -- and uses it as the "glue" to hold these three very different adventures together.

In a moment I will address each of the three "adventures" included in the module, but allow me to state up front how intriguing I find Pembrooktonshire.  I admit that I am a big fan of "town adventures," for as DM I get a big kick out of playing a wide assortment of NPC's, and I like the kind of political machinations and embroilments that can exist in a well-fleshed-out D&D town.  Even without the People of Pembrooktonshire NPC supplement (which I bought from LotFP but have not read yet), the town of Pembrooktonshire as outlined in No Dignity In Death is a vivid, self-contained adventure setting, rife with slightly offbeat adventure possibilities.  For example, the townspeople's resistance to allowing strangers to venture into the surrounding mountains -- a subject explored in the second part of No Dignity -- prevents PCs from simply treating Pembrooktonshire as a "pit stop" where delving supplies can be bought and equipment refurbished before they head off on their next dungeoneering or wilderness adventure.  No, the town as written demands that adventure parties be circumspect in their behavior and actions while in town, and cagey about revealing their plans to virtually any of the town's inhabitants.  This concept alone is worth the price of admission, and (it so happens) would fit very nicely into the campaign I am running in the Arandish kingdom of Minoch right now.

The first adventure in No Dignity, "Small Town Murder," is a murder mystery centered upon the town itself.  In most ways this is the best adventure included in the module: the murder itself is well thought out, the stakes are high (innocent gypsy children will be put to death if it is not solved in time), and it is an excellent way for a group of PCs to get to know the town and some of its key residents upon first arriving here.  Further, and this is the best part, the DM is free to choose his or her own murderer, since the circumstances around the murder itself allow for a wide array of possible motives, and the key piece of physical evidence could easily be moved around to implicate a different killer than the "default" culprit suggested by the text.  Raggi makes these options clear in his usual straightforward prose, and I think that the "Small Town Murder" section is in part the best section of No Dignity because Raggi's writing really shines here.  He is particularly good at describing characters and their motivations, and the key players in the murder mystery are all fully fleshed out with lots of juicy, conflicting goals.  Great stuff! If this section has a weakness, it is that it may not appeal to "hack-and-slash" type parties, since, due to the general (repressed) social climate of the town as well as the presence of Sir Tiberius Novius Tucca, very little overt violence or ruckus-raising will be tolerated.  Like many other of Raggi's adventures, "Small Town Murder" encourages thoughtful action and careful planning.  On the plus side, if the PCs are careful not to offend the locals, it is unlikely that they will face much in the way of lethal force while conducting their investigation -- a boon to low-level parties.

The second part of No Dignity In Death, "The Great Games," is probably the weakest portion of the module if taken alone, but serves as an excellent prequel or preamble to the third part (or any adventure that might lead the party into those forbidden mountains).  To be fair, the Games themselves are ingeniously designed and are really quite freaky -- I am not saying that the concept of the Games won't hold everyone's attention and make them ask "WTF is going on in this crazy town?"  The main issue here is that there isn't a whole lot for the party to do, at least until the end of the games.  So if you and your players like political intrigue, and if the PCs are willing to more or less be observers / investigators of a bizarre ritual, then "The Great Games" will work as an compelling mood-setter for what goes on in Pembrooktonshire in general.  And as with the first part, the DM is invited to change the details of who exactly is behind the townspeople's obligation to engage in the Games, so the event could easily serve as a launching-point for a homebrewed adventure in the area.

The third part, "A Lonely House on a Lonely Hill," is in fact the most "standard" dungeon adventure I have yet read by Raggi.  This is by no means a bad thing -- hell, most of my own campaigns are fairly "standard high-fantasy D&D-ish," so in fact I would welcome more LotFP products that were vaguely of this stripe.  "Lonely House" has a great central conceit (and central monster), one that links it to the whole Three Brides concept while being totally effective as a stand-alone adventure.  In fact, this is the great strength of the "Lonely House" section: its modularity.  "A Lonely House on a Lonely Hill" could easily be run without ever running either of the prior two sections of the module; it would not even necessarily have to lie outside Pembrooktonshire, but could be transplanted to an isolated  mountainous region in any campaign.  And there are some terrific Raggian touches here -- such as multiple possible resolutions to the primary mystery (and a random chart for the same) and -- my favorite -- a particular dastardly creature that is not at all what it appears to be at first.  So, in contradistinction to what James Maliszewski has stated in his own review of the module, this third section of the module alone is probably worth (to me) the low price of $12.95 for the print version.

In sum, I highly recommend No Dignity In Death - The Three Brides.  Due to the modular nature of its three Parts, a DM can cherry pick what s/he likes from this module and leave the rest.  Or, if you are as taken with the town of Pembrooktonshire as I am, you could run these three Parts in sequence as written, and/or use the setting itself as the foundation of a homebrewed adventure or campaign.

Creativity and inspiration-value: 5 out of 5.
Use-value to DM's: 4 out of 5, especially if cherry picked.
Playability:  Not yet tested.