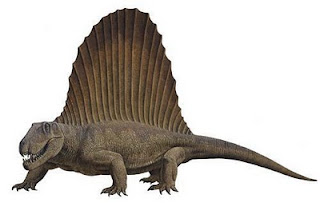 Part I: My Most Popular Post Ever
Of course, no sooner did I mention (in this post) that I tend to assiduously avoid consulting The Lands of Ara's blogger stats, than I started feeling inexorably drawn to do so. I checked them out late last week and learned something quite interesting: that the three posts with the all-time greatest number of visits are those that

(a) Include pictures, and

(b) Relate to some creature or phenomenon that has wide appeal outside the RPG'ing community.

So what were the three most trafficked posts (by far) on the Lands of Ara blog, you may ask?

I am immensely pleased that the Sleestak post is getting out there; I can only hope that those hits include a fair number of gamers who are using those terrific creatures in their games. Ditto for my "Horned Cyclops" variant monster inspired by Harryhausen.  But the insane popularity of the Dimetrodon post -- it has had more visits than any other post on the blog, by a factor of ten -- is clearly a case where my inclusion of a couple pictures (horked from the net) and the basic fact that DINOSAURS ARE COOL have drawn craploads of non-OSR folk to the post. I'm not complaining, but it just goes to show that my gut instincts (to avoid looking at the stats) may have been the smart play in the first place. Call me an elitist if you will, but I would much rather have gamers coming here and using this stuff rather than my posts simply getting massive hits because Dimetrodon pics are en vogue.

But the best part of the "Dimetrodon" story is yet to come.

Part II: My Own Embarrassing Admission
Paul Gorman at Quickly, Quietly, Carefully recently confessed some embarrassment over having never before played module B2 Keep on the Borderlands. Yet, as I pointed out in my comment, there are so many classic modules I have never played either, and one of those -- the one I most regretted missing out on in the olden days -- is Cook and Moldvay's X1 The Isle of Dread. 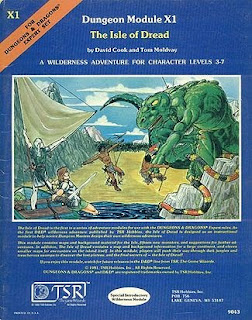 In fact, other than the (AWESOME!) cover, I never even laid eyes upon X1 until very recently. Some of the holiday money I got in December went toward a classic D&D module order from Noble Knight, and along with a few old, familiar favorites (S2, G1-2-3), I finally acquired Isle of Dread.

I suppose I should have expected this, given my awareness of the module's "Lost World"-esque theme, but imagine my surprise when -- reading through the module just a few weeks ago -- I realized that right in there were complete B/X stats for my favorite quasi-dinosaur, Dimetrodon!

So to some extent my efforts at statting this beloved creature were for naught -- or at least were redundant with Cook & Moldvay's earlier work. My version is 2 HD weaker than theirs (my 5 vs. their 7), but has better AC (my 4 vs. their 5), improved saving throws (my F5 vs. their F4), and slightly higher damage for its bite attack (my 3d4 +3 vs. their 2d8). However, the biggest difference between the two (besides those two hit dice) is the fact that my Dimetrodon can swim -- not historically or physiologically accurate, I don't suppose, but ever since I saw that sail-backed dinosaur in Jurassic Park III swim after its prey, I need swimming Dimetrodons! 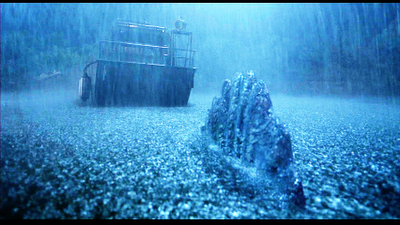 The swimming "Spinosaurus" sail in JPIII.
So, since my most popular post of all time turned out to be a bit of a dud in terms of presenting truly fresh content for my gamer audience, and since I believe in the sanctity of the Joeskythedungeonbrawler protocol, I now offer two new Dimetrodon-related goodies:

This 9' long sail-backed reptile is fiercely territorial. It is a voracious meat-eater often found in mated pairs or small packs. It is impervious to flame-based attacks. Its breath weapon, usable 3 times per day, emits a cone of flame 60' long and 20' wide which inflicts a number of hp damage equal to their total number of hp when the attack occurs (save vs. breath attack = half damage).

Ring of Dimetrodon Control
This rare and coveted magic item confers the following powers upon its wearer:

(1) Summon 1-4 standard dimetrodons once per day, and

(2) Command 1-6 dimetrodons once per turn, as per a Ring of Animal Command (see Labyrinth Lord p. 113); applicable toward dimetrodons and fire-breathing dimetrodons only.