Spawn crunch-ed the numbers long and hard, racked his brain, and then wrote, in the first of two long parts:
Bards. %$#^% bards. Many people have written about Bards in D&D, and many have felt pretty ambivalent about them: a class with no specific purpose; a hodgepodge of a fighter, thief, and maybe a druid; underpowered or overpowered; sort of magic-using but not actually magic most of the time; not really clear what the nature of their power is. I never really cared much about the class, and back in the day no one I knew played one (i.e., the PHB Bard). But now in Carter's Ara campaign, we have a Bard, Uncle Junkal, and so I've had to think about this. UJ is a Brave Halfling version B/X Bard with some 2e abilities like being able to throw two knives (or similar) per round. Like most Bards he can do some things like Charm Monster, Legend Lore, and Read Arcane scrolls ... and the rub is that these are d% rolls that basically are copied from Lab Lord Theif skill tables.
This becomes a problem because we have the d30 rule, which means at Level 1 he can Charm, say Ogres, Trolls, etc. ~70% of the time, and from Level 3 on it's an automatic Charm. To wit: 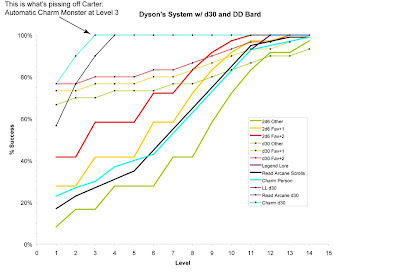 So, as it stands, since pretty early on we've had a Rock Troll in our party, which is nearly indestructible (certainly in the first couple of levels of Stonehell), and worse yet, UJ is ready to form a menagerie of all sorts of high powered monsters. This has been pissing Carter off, and he's started saying how he needs to send in more bad shit to kill us, and create deadlier wilderness encounter tables, or take away the Charm ability ... a whole bunch of stuff I as a player don't like the sound of. He doesn't hate us as players, but it's an unintended consequence of the d30's interaction with another set of rules and it's messing up the game. And as players we're starting to feel like we're getting away with a lot of stuff, even though we're just playing with the mechanics in the game. What to do?
Carter suggested, why not adapt Dyson's "2d6 Thievery" skills system to the BH Bard skills? (This is a feature within Dyson's Dodecahedron vol. 1, check it out! He says it's "d12 pages of Awesome", but you can ignore the d, I say.) Carter liked the idea of not having any d% rolls in a B/X game and the peaked rather than flat probability distribution of the 2d6, just as Dyson does. What would that do? Well, I decided to plot out the chances of success for different skills as is, and then as Dyson's Favored Skill with attribute modifiers, as well as Other Skills. Then these are plotted as d30 rolls as well (above). In the process of making that chart, I learned a lot of stuff about Bards ... and why some people vehemently hate them. I came to hate the Bard class we had very quickly. It made me angry. I will now begin to explain why.


So, we've got the three Bard skills. Let say one is the favored skill, player's choice. Dyson says you could give the attribute modifier to the Favored Skill if you like. For the Thief, that's DEX. Cool, makes sense that high DEX helps the thief. For the Bard, CHA is the prime req, so let's say we'll apply the bonuses for retainer reaction (made positive) to the 2d6 Favored Skill roll. For Charm Monster/Person, that makes sense. But Legend Lore? Read Arcane Scrolls? Why would CHA apply to that? Hmm. These mimic magic-user spells, so maybe INT bonuses apply to those. For that matter, Charm mimics a spell as well, so maybe we apply INT bonuses to all of them. Or only if they are the Favored Skill. Here's the problem: Is the Bard doing Magic or not? If the source of the power is arcane then the Charisma stuff doesn't matter. Why doesn't the Brave Halfling Bard explain any of this? So we wobbled on it, and then I finally distilled this:
How the Hell Does a Bard Do What it Does?

The Bard is -- if we take the folklore about them, the PHB version, the Brave Halfling version, and whatever blog-baggage it has accrued -- a figure that is iconic but poorly understood. We all know what a Bard does, but we don't know how the Bard does it.

1) When they Charm, they seem to work magic like any spell-caster, but it's difficult to say precisely whether it's arcane, divine, or not even really magic. People are captivated by performers, and it's inexplicable. W.S. Burroughs agreed with Jimmy Page, after attending a Led Zeppelin concert that they were literally absorbing, manipulating and redirecting the power of the audience as in ritual [Zak pointed us to this superb 1975 article]. Is Jimmy Page a magic user or a shaman? What about Jim Morrison? He thought he was a shaman, and so does he stat up as a cleric or what? Or, are they both Bards (along with Robert Plant, Syd Barrett [but maybe not Roger Waters], Mick Jagger, and of course the dreaded Paul McCartney ... and Stevie Nicks, Madonna, Prince, Henry Rollins, Johnny Rotten, Lady Gaga, Jello Biafra, etc.). Maybe CHA modifiers apply, seems appropriate given the performance-dependence of the skill.

2) Reading Arcane Scrolls .... Bards do tricksy things, and so they are like present-day magicians/illusionists. 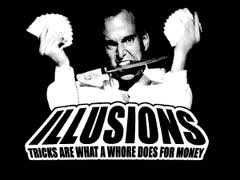 But they are also like thieves, in that they rely on misdirection and light-of-hand for some of their powers. Seemingly Uncle Junkal Charms by juggling. So the thieving aspects make sense in that respect. They aren't really doing "magic". Even when the thief reads an elf scroll, s/he is tricking the scroll or the Vancian Magic Universe into thinking the thief is properly able to use the scroll. It's a trick. Period. As it is when the Bard does it. No modifiers for DEX (Thief) or INT (MU/Elf) apply.
3) Legend Lore. They are trained in lore, whether it's folklore, legend, history, oral tradition, etc., and they LEARNED all of that stuff by studying it. They did not acquire it by a magical or innate process. They belong to colleges, they have mentors, etc. They have knowledge because they were exposed to a hell of a lot of knowledge during their studies. So, there's no magic in their Legend Lore, it's just book learning. For convenience, for this ability and for Charm, PHB and Brave Halfling refer to the existing mechanics of those spells, but (I submit) neither are magical when the Bard uses them. Even if they were, no INT modifier applies to MUs when they cast the spell. And all of this learning happened (at least with the Brave Halfling version we're using) before the PC was even created, so an argument than INT bonuses should apply afterward is suspect. No modifiers for INT, because you're already assuming with this skill that they might be able to read a language they don't know (and knowing additional languages is the generic INT bonus).
So, bottom line: Charm Person/Monster for Bards in a Dyson Logos-based 2d6 system accrues the absolute value CHA bonus (wrt Reaction modifers), but Legend Lore and Read Scrolls accrue NO attribute modifiers, period.
Huzzah! There's some crunch and some analysis that gives us some relatively clear ideas about what the Bard does and how. I'm feeling like an Old School Blogger now, wading through the dreck, salvaging some logic, presenting a coherent ruling, knocking down the pixels like shots of cheap bourbon. But, that's just the start, we're not out of the woods yet! We merely have made a small Heideggerian clearing in the vast and tangled Bardish thicket. "Delving Deeper" (as it were) Carter and I will endure more perils before succeeding in our quest to bring our readers a not-totally-jerry-rigged ass-can B/X Bard. More on that, and the final resolution, tomorrow!