Review: The Majestic Wilderlands and The Wilderness Alphabet

Since the 1990s, when I more or less completely abandoned AD&D for Crimson Blades of Ara (my homebrewed d%-based RPG), my PC parties and I have spent a huge amount of adventuring time trekking around in the great out-of-doors. I am sure this tendency is an outgrowth of two main things:

(1) The influence of Tolkien's Lord of the Rings books, which, despite including an incredibly memorable dungeon or two (e.g., Moria and Shelob's Lair), mostly take place above-ground, and

(2) The fact that Dave and I spent so much frikkin' time designing the Lands of Ara, and therefore wanted to spend a ton of time exploring it in-game.

So wilderness adventures have probably made up the majority of my RPG'ing exploits for the past two decades -- and all of that adventuring has occurred in Ara. 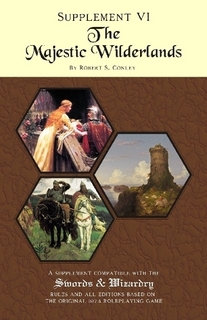 But of late, as I look toward adapting the Lands of Ara setting to old-school domain-level play -- i.e., stronghold construction, hexmap-based monster clearing, etc. -- I have felt the impulse to look to the masters for some helpful guidance about how to proceed. This has led me to purchase two fine old-school products, Rob Conley's The Majestic Wilderlands and James Pacek's The Wilderness Alphabet, and I thought I would share the fruits of my first read-through of these two supplements with you.

The theme that unites these two products is that both are the result of lengthy campaign-based play by their respective authors. Conley introduces his book by stating that it "has been thirty years in the making [. . .] over the course of many campaigns" and Pacek peppers his text, which mainly consists of random tables a la Michael Curtis' Dungeon Alphabet, with prose excerpts describing situations that emerged during his Queston Campaign. This bodes well for both products, since I implicitly trust gaming content that comes from actual play more so than stuff that was just invented ex nihilo by the author. 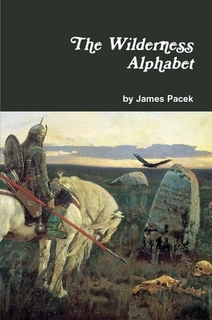 Conley's Majestic Wilderlands, which calls itself "Supplement VI" in reference to its place in the chain of the original five LBB Supplements plus Geoffrey McKinney's Carcosa. Particularly given its strong connection to the 1977 Judges' Guild setting of the same name, I do not begrudge The Majestic Wilderlands its claim to "Supplement VI" status. In fact, I admire boldness and kind of like the idea of new authors creating new supplements to the classic 1974 version of D&D. But I can also understand why this move might rub some people the wrong way.

As for content, The Majestic Wilderlands contains quite a wide array of it in its relatively compact 150 pages. It is organized into three sections, like the original LBB's: "Men & Magic" has Conley's PC subclasses, additional races, a skill system, and some new (optional) combat rules; "Monsters & Treasure" has monsters and new magic items, and "Underworld & Wilderness Adventures," which constitutes the bulk of the book, outlines the Wilderlands setting itself, first by region, followed by a focus on "The Main Campaign Area" of his own campaign, and concluding with a listing of major cultures and religions of the Wilderlands.

My favorite aspect of this supplement is its wide array of offerings -- e.g., many new PC options, exciting new races, a d20-based skill system if you're into that, TONS of well-composed region descriptions -- which all come together to suggest the broad outlines of Conley's home campaigns. I could name a few personal highlights -- the berserker and myrmidon sub-classes, ALL the new thief sub-classes, reptile men and lizard men, all the region maps and descriptions -- but the great thing about the book is that everybody will have different favorites, and there is so much exciting and well-thought-out content here that there is surely something for everybody in The Majestic Wilderlands. Furthermore, the production value here is for the most part quite high: the book is well laid out, the maps are terrific, and there is even a cool calendar near the end that I find quite intriguing. Calendar systems are an aspect of fantasy RPGs that I tend to enjoy, and I am happy that Conley shared his with us.

If The Majestic Wilderlands has shortcomings, they are few. Some the art is not quite as awesome as the rest of the book's content (including much of the other art!) -- for example, I LOVE the cover, the battle scene on p. 11, the still life on p. 22, the castle on p. 26, etc., but the "rogues" pic on p. 34 is too pixellated, and the orc headshot on p. 52, while appealing in itself, seems aesthetically out of step with any other drawing in the book. Beyond that, I WANT MORE MAPS! As Rob Conley has shown again and again on his blog, he is one of the masters of the hex-map -- so why no hex-map in Majestic Wilderlands? When I bought the supplement I was really hoping for a hex-map or two or three, and while there are some dynamic and attractive maps herein, my map craving was not fully satisfied by this product. However, that may be more a result of my hopes / expectations than an explicit fault of the book.

James Pacek's The Wilderness Alphabet is less ambitious product (in scope) than Conley's, yet packs a lot of punch in its mere 59 pages. Pacek's book has more of a personalized and "down-home" feel that reminds me a bit of Oubliette Fanzine, an old-school periodical I happen to like a great deal.

Art-wise, the illuminated letters for each Wilderness Alphabet entry were superb throughout and, after the front cover image, constitute my favorite aspect of the artwork  The (mostly public domain) art is superb in places -- see, for example, the front cover -- yet there are also some inconsistencies. For example, I am ambivalent about the gray-scale images printed underneath many of the tables. A couple of them work well for me (e.g., the archway on p. 9, the ruins on p. 37), but just as many (e.g., fountain p. 41, image p. 49) somewhat interfere with the look of the tables. The idea is clever and well-executed, it just may not be fully to my taste. I have an inherent love for the aesthetics of tables, graphs, charts, and hexmaps --I find them pleasing -- so I would have been happy simply to enjoy The Wilderness Alphabet's tables more or less by themselves.

Content-wise, I have nothing but praise for The Wilderness Alphabet.  You get twenty-six entries featuring random tables, one for each letter of the alphabet. Plus you get a goodly number of bonus tables and an entire bonus letter entry (for "Labyrinth") as well. These "bonus features" really add value for me, because they:

(a) efficiently pack in more content besides the expected 26 entries, and

(b) give the book an even more personal vibe, as if Pacek couldn't resist throwing a few more tables in, or maybe these were actual tables he used in his game, so he just left them in . . . like The Wilderness Alphabet is simply a transposed section of his DM's notebook.

The Old-School credentials Conley's product boldly and deservedly declares on its cover ("Supplement VI") are displayed by Pacek's somewhat humbler book in a more raw, grunge-rock kind of fashion. Both products are well worth their cover prices ($12.00 for Wilderlands, $9.00 for Alphabet). I will use them both, but use them differently. From The Majestic Wilderlands I will cherry-pick some of the treasure ideas and a couple of races (most likely for NPC use), and I will read and admire the Wilderlands maps and regional descriptions. I will also read and drool over Conley's wonderful sub-classes -- especially those thieves! -- but will have to wrestle my own demons as to whether I really need any more frikkin' character classes in my current campaign. I may not use Conley's excellent book at the game table that much -- its role may be more one of inspiration than direct functionality for me. Bear in mind that I have my own Lands of Ara as a wilderness adventure setting so don't need to take advantage of The Wilderlands setting in whole cloth.

Pacek's book will definitely dwell at my side when I'm at the gaming table. My party and I are big wilderness adventurers, and I am hoping to get some chances to plant some Wilderness Alphabet randomness into the wild mountains of Minoch. The real strength of Pacek's product is that you know whet you're getting -- a storehouse of random tables for outdoor adventuring use -- and you get what you pay for. Its simplicity is its strength. Conley's supplement is richer, denser, and much broader in scope -- but therefore potentially of more widely varying levels of appeal.

The Majestic Wilderlands
Creativity and inspiration-value: 5 out of 5, of great value to anyone who wants to see "under the hood" of a long-running old-school FRPG campaign, or wants to spice up a homebrewed wilderness adventure campaign with some of Conley's excellent ideas.
Use-value to DM's: 3 out of 5 to 5 out of 5, depending upon how much you plan to use from it.  I'm a world-builder like Conley, so may only use selected parts, but other DM's could easily run an entire Majestic Wilderlands campaign using this book and their old-school ruleset of choice.
Playability: Not yet tested by reviewer, but I assume it has been thoroughly playtested by the author.
Awards Season Buzz: The Majestic Wilderlands is in the running for a Three Castles Award. Best of luck, Rob!

The Wilderness Alphabet
Creativity and inspiration-value: 4 out of 5.  This is a well-made and reasonably priced OSR product.  It is full of usable content IF you like using somebody else's random tables, and the brief writeups about Pacek's Queston campaign are delightful and inspiring.
Use-value to DM's: 4 out of 5, IF (like me) you like books full of random tables. Not much variation from that theme, though, which could limit its overall use-value.
Playability: Not yet tested -- but will be soon!