I was reading my friend Carl's blog this weekend, intrigued by the post where he claims that

While I am completely in agreement with Carl's general point, that "the differences of edition are trivial compared to the commonalities experienced at the table," I still do feel that different rules systems do produce slightly different gaming experiences. Perhaps not radically different ones, but different ones nonetheless. For me, there is a palpable difference between a game that has "healing surges" and one that doesn't, one that has "tieflings" and one that doesn't. This may, as Carl suggests, be a matter of houseruling, or simply my own curmudgeonly partisanship shining through, though I would say (as I have said before) that the actual rules mechanics you play with DO have a noticeable impact on what kind of game play occurs at the table.

I have debated this point with Carl before -- see comments here -- and he and I have a healthy "agree to slightly disagree" pact on this. Looking back over those comments from late November, I really like the way our back-and-forth brings out some very interesting points about the role of the rules system vs. the role of DM style and houseruling. I want to contribute a few more good-natured thoughts to the ongoing discussion of this topic, in order to

(a) voice my total support of Carl's community-building premises, i.e., that "the differences of edition are trivial compared to the commonalities experienced at the table" and that "the final product of houseruling plus the old school game system of choice is far closer to the current iterations (Pathfinder, 4e) of D&D than most of the OSR would care to admit"

(b) reiterate my view about the role of rules systems (and to explain why I suspect that edition differences DO matter at least sometimes) via a driving metaphor.

To start off, a recent post by Al Krombach has forced me to re-evaluate how different 4e might actually be from older editions, or at least to reconsider when those differences vis-a-vis original edition D&D began to take shape. In short, did min-maxing begin with 1e AD&D?

moved the bonuses for [attribute] scores to the higher end of the score range. A 13, which got you a +1 to-hit and damage in B/X, got you squat in AD&D; you needed a 17, a much rarer ability score (see the no-doubt peyote-fueled bell-curve and mathematical discourse on DMG pg10) to get that +1 to-hit and damage. This new element of D&D would help add yet another new element: min-maxing! You usually needed higher scores to even play one of the nifty new classes AD&D offered like the Assassin, Monk, or Ranger. And, no one wanted a sucky fighter with no bonuses to hit, or a thief with no bonus to AC, or so on. So, a way had be invented to provide players with a means of getting higher ability scores. Interestingly, the "need" to min-max must have been apparent very early on, as Gygax takes time to introduce ways of getting those higher ability scores (DMG pg11), stating "it is important to allow participants to generate a viable character of the race and profession which he or she desires". Note the word "viable", which means "doesn't suck".

Al notes what a major departure this was from earlier editions of D&D:

Before AD&D the dice fell as they would: maybe you got a 7 strength and a 16 wisdom, and no matter how much you might've felt like running a super-strong Gilgamesh-type hero, you were stuck with either a weak fighter or a decent cleric. Now [with AD&D] you could roll strength six times and unless you were pretty unlucky, you were going to get something you wanted.

Wow! So maybe Carl is right, that 4e is not such a radical shift from earlier editions when we note this transition away from the "old-school" sensibility already underway in the 1e DMG.

But why, then, do I find D&D 3.5 / Pathfinder combat and feat resolution so time-consumingly dull?  Is it possible to have empathy for a system (which I do, greatly, for Pathfinder, since I actually had some great times playing it and I like Paizo and their fan-centric vibe) yet to not want to play it?  Do edition differences matter?  (Again, I ask this question analytically, not evaluatively.)

I find 4E to be too mechanical and combat-centric for my tastes.

My experience with 4e and every other edition is that the group and DM determine exactly how much combat is the focus of the game. If the DM wants to feed encounter after encounter to a group willing to hack and slash, then sure, any edition is combat centric. If the group wants to talk, or find alternate solutions to problems, adopts a "fight as a last resort and usually in self defense" policy, gets involved in political intrigue between factions, etc... then any edition is not focused on combat.

This line of reasoning, while correct in terms of the overall game play experience, is not directly relevant to how combat itself (or other actions governed specifically by the rules, like chargen) feels or plays within the different systems. My guess is that Paladin feels that 4e is too "combat-centric" NOT because it forces 4e games to be all about melee combat, but because ONCE YOU DO ENTER COMBAT it is quite sophisticated and detailed, and therefore takes longer to resolve. Sure, Carl is right, players and DMs can choose to play combat-heavy or combat-lite D&D regardless of edition; but I argue that what happens once the party actually enters a tactical situation definitely feels different -- and takes different amounts of time to adjudicate -- depending upon the rules system one uses. 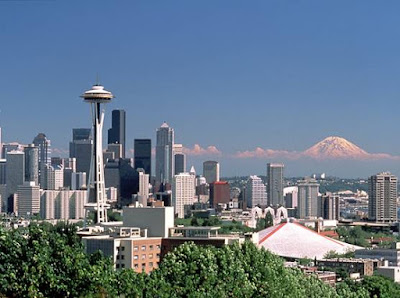 I grew up in Seattle, and learned to drive there. When I was growing up, my parents only had stick-shift cars, so manual transmission is I what I learned on. Downtown Seattle is steeply hilled, and there are certain stoplights on those hilly streets that one comes to dread when one is a novice stick-shift driver, because once you are stopped at such a light on the downhill side waiting for it to turn green, you realize that as soon as it changes, you have to remove your foot from the brake for an awful split-second as you move your foot over to jam on the accelerator as you pop the car into gear. Even highly experienced drivers quite used to manual clutches get to test their mettle in such a scenario -- there is ALWAYS a slight roll backwards in that split-second before the clutch engages and the car surges forward, up the hill. 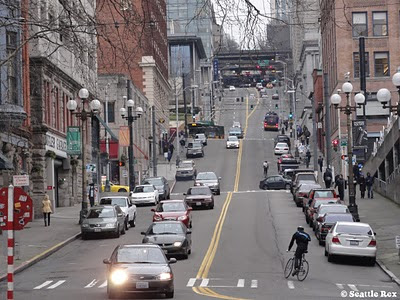 James St., downtown Seattle.
This moment of releasing the brake and rolling backward (potentially into the car right behind you) is something that drivers of automatic transmission cars simply never have to deal with. They just push the gas and go, no terrifying split-second roll backwards for them at all. Unless those drivers have driven or ridden in a manual-transmission car on a similar hill, they will not even know of this phenomenon that so haunts the manual-clutch driver on certain stoplights on steep hills in Seattle.

Now take the same experienced driver in two different cars, one automatic, one stick-shift. That driver can do everything in his or her power to make the automatic transmission car drive just like the stick-shift one, and vice-versa, and under certain circumstances, like the open highway, he or she might succeed. But if that driver ever comes to a stoplight on a steep hill in Seattle, no amount of driver style or finesse is going to change the fact that an automatic transmission car will simply hold its position on the slope, and the stick-shift will not, once the brake is released for that harrowing split-second. In other words, in certain conditions, each type of car is going to reveal its nature, even in the hands of the same, incredibly experienced driver.

Similarly, 4e combat is 4e combat. It does not rule out or discourage great roleplaying nor does it dictate a combat-o-centric playing style. But it governs combat and tactical situations in a specific way that does feel and function differently from other editions of D&D.

Is this sufficient grounds for those of us who prefer older editions to be 4e (or even Pathfinder) "haters"? ABSOLUTELY NOT. Does it point to the fact that even though individual DMs and players do indeed heavily influence what happens in their games, nevertheless the game experience cannot be "exactly the same" from edition to edition? Absolutely.

This is NOT an incitement to Edition War, nor a rebuttal of what I take to be Carl's main point, that "we should all be friends and appreciate our commonalities." Agreed! But this is a plea that we remember that "all being friends" means tolerating each others' differences, including edition preference, NOT insisting that those differences do not exist or that they can be erased given the presence of the right DM.

This has also been a bit of a rant; so, following the Joesky Protocol, here is my offering:

Ring of Alignment Change
This ring functions as a +1 Ring of Protection but also has another, more subtle (cursed) function.  Once someone dons the ring, it cannot be  removed for 1d6 weeks; over the course of those weeks, the being's alignment will gradually shift from its current state to one other randomly-determined alignment.  Optionally the DM may choose the alignment to which the ring-wearer shifts.  In any case, this shift is irreversible by any means, and the being must now act and behave in accordance with the dictates of the new alignment.  The ring continues to function as a +1 Ring of Protection at all times, but can alignment-shift each being only once.