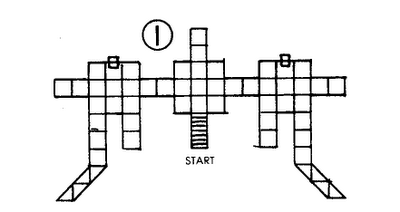 Having chosen to embark upon the wild and woolly real-life adventure known as Megadungeon Creation, I decided that the first thing I need is a large backlog of maps.  More maps than I may even ultimately use for the megadungeon itself.  So many maps I don't know what to do with all of them; so many that I will be able to pick and choose the best ones when it is time to start "solidifying" the basic layout of the individual dungeon levels and sub-levels.

This is actually a lovely place to start because in some ways, map drafting is (for me anyway) one of the lowest-stress aspects of dungeon creation.  No stocking has been done yet, not many specifics are known, and I am free to simply fill up sheet after sheet of graph paper with rooms, passages, caverns, doors, tunnels, stairwells, ramps, and the occasional bit of cartographic weirdness.  I was slow getting started but four or five weekends ago I became a mapping fiend, creating more or less one entire megadungeon level (don't know which one yet) over the course of a few days.  Last weekend I engaged in another mapping blitz, completing two-thirds of a level in one day, and I have plans to do more megadungeon mapping this weekend.

When I started creating maps for the megadungeon project in early January, one of the first methods that I wanted to try was to create a whole level or two using EGG's random dungeon generator charts from pp. 169-172 of the Dungeon Master's Guide. This soon proved a bit too tedious for me, as it involves a great deal of die rolling just to generate a very small amount of mapped material. No offense to Gary G., but has anybody out there developed a simpler, down-and-dirtier version of the random dungeon generator? I may return to that (aborted) randomly-generated map in time, but honestly I only lasted about an hour and fifteen minutes with those DMG random generation tables, and only got about a third of a page mapped. I love the idea of randomly-generated maps but apparently lack the patience to wade through that much die rolling.  In short, I was bored.*

Then a mapping lifesaver arrived in the form of Fight On! #6, which I ordered back in December amongst a stack of other things (other back issues of Fight On! and a hardcover of Goblinoid's Mutant Future with the cool new cover art) and which arrived in the first week of January. On pp. 65-66 of FO! #6 is a superb article by Jeff Rients called "Holy Crap! I Need A Dungeon RIGHT NOW!" While Jeff's article is intended for use in times when one needs to generate a quick dungeon level or sub-level because characters have stumbled into an area for which the DM is unprepared, I found that the method outlined really spoke to me in general, so I started using it for generating my megadungeon maps. I don't want to give too much away here, because in fact I'd like to encourage you all to buy that particular issue of Fight On! (the best one ever, IMO) -- but I will mention the broad strokes: Draw a generous handful of square and rectangular rooms distributed at random, followed by a few larger square and rectangular chambers, also randomly placed. Next, a few irregular rooms and connecting passages. A few dead ends, a few traps. Etc.

The thing that really inspired me about Rients' quick mapping method is that it freed me from planning, or worse, over-planning my sub-levels. My whole goal in using the DMG random generator had been to release the mapping process from my conscious control; Rients' suggestions helped me achieve that without all the damn die rolling. Now when I pull out a blank sheet of graph paper, I just start peppering those initial square and rectangular rooms around -- and that gives me some of the "random" feel I was going for with the DMG charts in the first place.  Thanks Jeff! 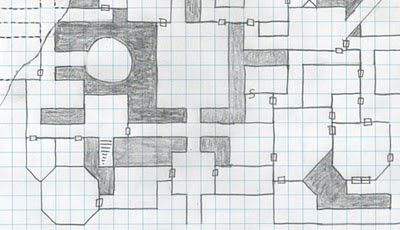 One final note about my mapping methodology: before I tuck each individual 8.5 x 11" map away into a file folder for future stocking, I add at least one "custom chamber" or special locale to it. That special locale -- which may be an unusually shaped chamber, a "water feature," or even a perfectly usual-seeming room with a statue or other fixture in it -- then gets named using Al Krombach's awesome Megadungeon Random Area Name Generator. I can't tell you how much fun I've been having with that name generator. Like my other mapping strategies, it is designed to keep the megadungeon and its contents just slightly outside my control. Thanks Al!

To be clear, I DO have a few ideas for megadungeon levels that will look a specific way, will feature certain preselected monster groups, will have a predetermined history, and therefore will be more consciously and deliberately designed. (Actually, this has already happened to a slight extent, as I have drawn most of the main entrance level to the megadungeon -- a level whose basic contours I have known in my head since the early 1990s.)  But for now, I am trying to avoid over-thinking things too much and am instead letting random chance and quickie mapping techniques dominate my approach to cranking out the sheer bulk of maps I need in order to see the megadungeon project through to completion.

* I have since developed my own, slightly simpler random dungeon generator, but upon giving it a test run last weekend, I found that things didn't go much faster than they had using EGG's tables.  So I am forced to concede that random dungeon generation may just be too slow and tedious a method for me in general.  We will see.