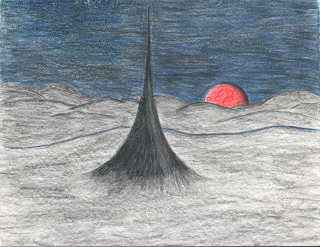 The Mornlyn Spire (Artist Unknown).
As I have mentioned before, I am rather lousy at following a preset plan. I have an unerring need, at some point in any process, to go "off-book" and disrupt whatever rule or overarching game-plan I may have had at one time. In a way, this is a very Old-School Gamer attitude; as James M. recently noted in regard to house rules, it is much more old-school to let things evolve out of play, or out of the organic process of a thing, rather than trying to pre-formulate such rules or invent stuff in a vacuum.

Given that, what I am about to outline is destined to break down or fail at some point. But megadungeon design is a momentously large undertaking, and, having never done it before, I thought I would propose a few general guidelines to shape my initial foray into the process, knowing that I will inevitably violate one or many or all of these ideas somewhere along the way.


Carter's General Megadungeon Design Parameters
1. I will have as much fun as possible at each stage of this process.

2.  I will draw the original maps by hand. I reserve the right to commission a cartographer to guest design a level map or two, and I MAY use a random geomorph generator for a level or two, though I need to investigate the publication/copyright implications of the latter option since I eventually intend this for print publication.

3.  For the most part, the megadungeon levels will be stocked randomly. My starting point for that process will be the random labyrinth stocking tables in the Labyrinth Lord core rulebook pp. 123-125 and the Advanced Edition Companion pp. 147-150. (See also the DMG pp. 169-172 and 216-220.)

4.  At least once per level, I will use Michael Curtis' Dungeon Alphabet -- I will devise a random rolling system for determining which entry to use (excluding monsters probably), then use his tables to add something cool to each level.

5.  Other possible resources to consult include Al Krombach's Megadungeon Design Resources pages, issues of Fight On!, Knockspell, Oubliette, and OD&Dities.

6.  There will be a few "custom levels" where I establish a dominant concept, but I will likely still stock outlying rooms and areas on those levels randomly.

7.  Publication-wise, following Michael Curtis' Stonehell, I will release levels 1-5 as Volume 1 and levels 6-10 as Volume 2.

8.  Also following M. Curtis and others, I will use the One-Page Dungeon Format for levels and sections of levels whenever possible.

9.  I need to commission a talented cartographer to generate the main Megadungeon Layout Cross-Section Map, since the overall design I have in mind is unique and will be tricky to illustrate clearly -- at least for me.

10.  I will have as much fun as possible at each stage of this process.