My copy of Goblinoid Games' Realms of Crawling Chaos arrived last Saturday, and I have really been enjoying reading it.  It is, as Dan Proctor emphasizes in the opening pages, a Sourcebook, NOT a complete setting unto itself.  I think that that is a key point to bear in mind when assessing this product and appreciating what it has to offer.  Anyone expecting completeness or over-arching coherence will find ROCC to be a bit uneven and possibly disappointing; but those who see it as a modular ideas compendium will find a lot to like about this succinct and content-rich book.

I recently read my very first Lovecraft stories ever, so the timing of ROCC's publication couldn't be better for me.  In some ways, ROCC serves as a superb primer on the HPL "mythos" -- and the fallacy of thinking that there is such a thing, at least in any truly unified sense.  Proctor makes clear from the outset that neither HPL nor ROCC has much concern for presenting a coherent setting / mythology.  He supports this with a really excellent list (provided as Appendix 4 to the Supplement) that runs down all the various creatures and concepts from the book, referring the reader to the various HPL stories (and a select few other texts) in which they appear.  This is a really smart move; I could easily see myself (now that I am a bona fide Lovecraft fan) going back to those source texts to reflect upon the creatures etc. in ROCC as described in the Old Gentleman's own words.  In general, I am quite fond of ROCC's relatively high degree of fidelity to the work of HPL, rather than accounting for all the universalizing tendencies that arose in the post-HPL "Cthulhu" texts.

That said, it must be emphasized that I used the word relatively in that last sentence for a reason: Proctor and his co-author Michael Curtis definitely present material here that goes beyond HPL's stories and thought.  The most notable of these "loosely inspired by" sections is the one on Psionics, the section I want to focus on for the rest of this post.  In other words, this will NOT constitute a thorough review of Realms of Crawling Chaos -- that task has already been admirably performed here, here, here, and here.  Instead, I want to riff on one of my favorite parts of the Sourcebook, and, in adherence to the Joesky Protocol, conclude by offering ROCC-inflected stats for a classic, much-beloved D&D monster.

As my prior wording suggests, I identify as more of a "riffer" than an "originator" -- I may not be all that intrinsically creative, but give me a genre or a template or a loose set of guidelines to work within, and I can generate usable gaming content like nobody's business. Like many folks, I have long struggled with psionics in D&D, and by "struggled" I suppose I really mean I have mainly ignored them. But this saddens me: I like the IDEA of psionics a great deal, but they have always seemed too complicated to be worth it, at least as presented in the AD&D Player's Handbook Appendix A.

But Realms of Crawling Chaos solves all that for me by presenting a simple, Labyrinth Lord-compatible psionics system. The system is based upon the psionic practitioner's "Psionic Strength" (PS) which is an attribute equal to a creature's wisdom. This is similar to the Mutant Future mental attacks mechanic, wherein "Willpower," that game's substitute for LL's Wisdom, is used in conjunction with mental-mutation-based attacks as well. For the purpose of arriving at a WIS/PS score for monsters, ROCC provides a conversion table based upon the monster's intelligence level (i.e., low, average, genius, ultra-genius, etc.).

So, armed with the newfound psionics treasure trove ROCC provides, I hereby offer my own take on the most dreaded and important psionics-dependent monster of all time, the Mind Flayer. Before presenting the stats, however, I wish to acknowledge the work of Justin at Old School Psionics, who offered this superb analysis of the Mind Flayer, with which I happen to totally agree. An excerpt:

Mind Flayers are EPIC, straight up. They are the kind of arch-foe you can design a campaign around. Using them as some random creature encounter in some room in a dungeon is a complete waste, not to mention totally illogical. It is almost a certainty that any dungeon they are in, they are the masters of. [. . .]

[Note: Anyone who is interested in old-school psionics should also be sure to check out Justin's OSRIC update and expansion of 1e Psionics, including a new class, the Psionic Adept. Justin's well-fleshed-out system is still WAAAY too complex for me, but worth checking out for sure.] 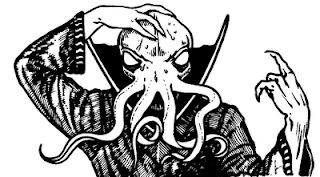 The mind flayer's physical attack is a simultaneous strike with all four of its tentacles. If a tentacle hits, it reaches the opponent's brain in 1-4 rounds, drawing forth the brain and immediately killing the opponent.

Psionic Flight: The character may fly through the air with a movement of up to PS x 10. Any encumbrance will hinder the movement by reducing the speed at a level set by the Labyrinth Lord. [Adapted from Mutant Future p. 29.] [Partially subs for "Levitation" in AD&D]

Body Equilibrium: Allows the user to adjust the weight of his or her body to correspond with the surface upon which he or she is. Thus, the possessor can walk upon water, quicksand, mud or whatever. With respect to falling, this discipline has the effect of the magic-user spell feather fall (AEC pp. 62-3).